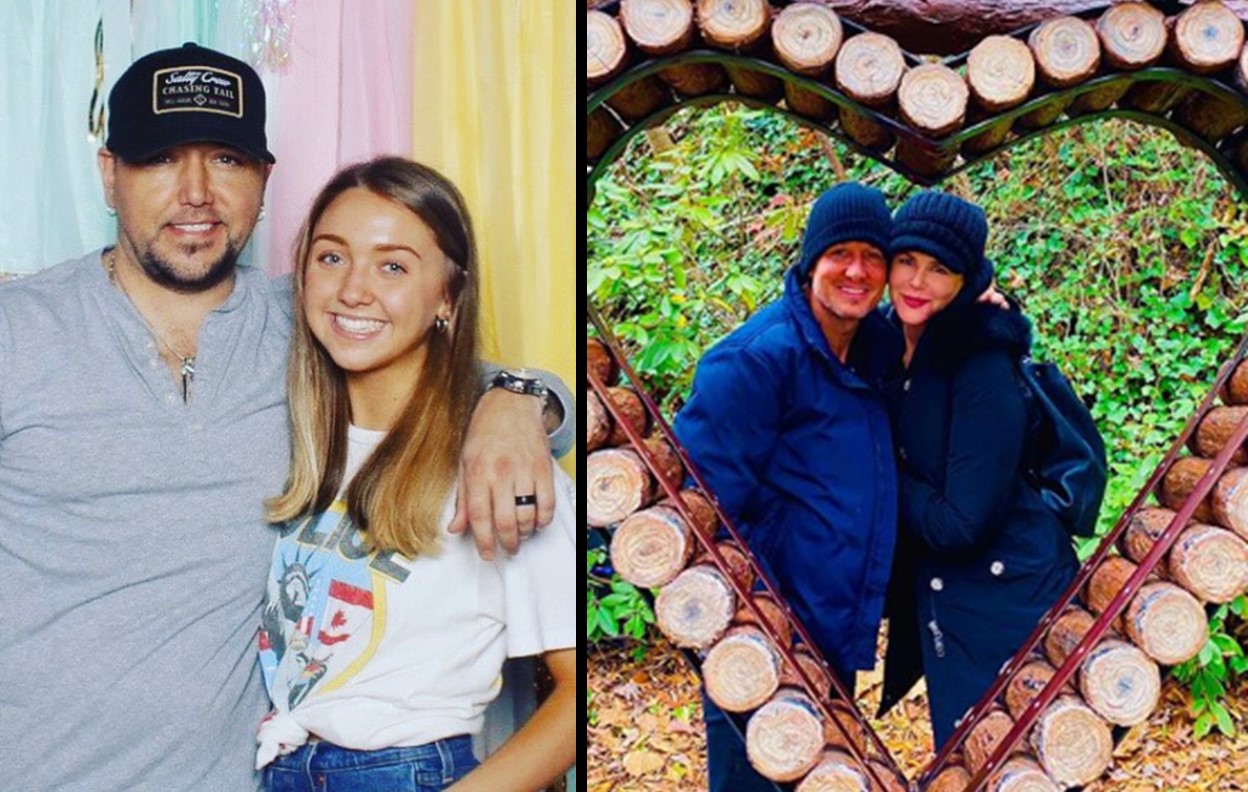 Valentine’s Day 2020 is officially in the books! Check out how some of your favorite country music stars celebrated the holiday...

Friday, February 14th was Valentine’s Day! Check out what an array of country music stars have to say about the romantic holiday and how they celebrated below!

Caroline had the flu, but Luke still made it special with a cake and balloons!

When I said I wanted to spend Valentine’s Day in bed, this isn’t what I meant…every woman really wants to be alone with snacks and watch crap on tv. Happy Valentine’s Day from the infirmary!

Happy birthday Keeley! I can’t believe u are 17 today 🤦🏻. You are one of the coolest kids I know and I am very proud of the person u are turning into. Happy birthday 🎃! I love u.

Kane Brown and Katelyn‘s V-Day was spent on the basketball court!

ALAN JACKSON TALKS ABOUT HIS LOVE FOR WIFE, DENISE, OVER THE YEARS:

“We got a lot of history together now, and we’re happier than we’ve ever been. So, she’s still beautiful, and she’s always inspired songs. I mean, one of my early hits was a song called ‘I’d Love You All Over Again,’ I wrote for her for our 10th anniversary. I mean, there’s been a zillion songs that have pieces of our good days and bad days inspired, and they continue to.”

40 years later…. I’d love you all over again

CARRIE UNDERWOOD IS ALL ABOUT THE VALENTINE’S DAY CHOCOLATE:

11 years ago yesterday, I met the love of my life…patient, kind, the best dad, handsome, of course! Someone who accepts me and all my flaws…the same as me in many ways…opposite in some. But he is my match. The iron to sharpen me….tonight we celebrated at @delposto . A rare night out with amazing food and even more amazing company and conversation. Here’s to so many more years together. Love you, babe! 😘

KEITH URBAN TALKS ABOUT THE SUPPORT HE AND HIS WIFE, NICOLE KIDMAN, GIVE EACH OTHER, WHICH IS ESPECIALLY IMPORTANT WHEN TWO CREATIVE ARTISTS ARE MARRIED:

“I feel very blessed that I have the support of my family like I do. It’s a beautiful thing having two artists because we understand the passion and the responsibility of what we get to do. It’s very important.”

”I married my college sweetheart. We dated back in college and broke up for nearly six years, and while I was off doing my Nashville stuff and touring and writing songs, she was finishing getting her career kind of going. Man, we just kinda bumped into each other one night, and it was like bam, here we are married.”

JOSH TURNER SAYS HIS WIFE WOULD CALL HIM A ROMANTIC, BUT NOW THAT THEY HAVE FOUR CHILDREN, IT TAKES A BIT OF WORK TO MAKE TIME FOR EACH OTHER:

“If you ask my wife Jennifer if I was a romantic, she would definitely say, ‘Yes,’ but she knows that sometimes my hectic schedule and our busy lifestyles can kind of interfere with the romantic side of things. But we do try to make efforts towards being together and having adult conversations and taking time away from the children and doing things that husbands and wives do, so we’ll definitely try to continue that for a long time to come.”

Happy Mother’s Day to all you beautiful mamas out there! 😍

DIERKS BENTLEY SAYS THE MOST INTERESTING GIFT HE AND HIS WIFE CASSIDY HAVE GIVEN EACH OTHER WERE MIXTAPES OF SONGS:

“When ‘What Was I Thinkin’’ was released in 2003, I didn’t know what my life would look like, and all of a sudden, I found myself out on the road full-time, just gone. So, the place where I was staying, I had some friends pack it up and move it into a storage facility…and in there I found some letters that she and I had written back and forth when we were dating. I was working at The Nashville Network and she was working out in San Francisco and found some letters I had written her and I’d gotten back and some stuff she’d sent me, including a CD of songs she’d been listening to, back when you made CD mixes and there’s like these three hearts on that CD. I just found that it was so meaningful for me those gifts you give each other before any money, before anything else was going on, just music, giving of mixtapes was so cool. She reminded me of a mixtape that I had sent her. I’d sent it to her via FedEx, because it was so important she get this as quickly as possible. This was sadly before, I guess we had internet back then, but you really couldn’t send songs over the internet. I think the most interesting thing I’ve given her and she’s given me was just mixtapes, because there’s nothing like music to put into words and the thoughts you have in your head that you can’t formulate yourself.”

Happy Bday Cass! I love you (so does Doug…)

JON PARDI SAYS HE HAS LEARNED A LOT ABOUT LOVE AND ABOUT VALENTINE’S DAY FROM HIS FIANCÉE SUMMER:

“One thing Summer’s taught me is that gifts are cool, diamonds, blah, blah, blah, but take your time and clear your mind and write something about what she means to you on a card. It’s probably the least expensive and the biggest price you can give her is just to write and tell her how much you love her on a card. That’s what she taught me for Valentine’s Day. So, I just do that; it’s way cheaper. And of course, I always say to her, I say, ‘Babe-every day is Valentine’s Day for you.”

Be sure to share these Valentine’s Day memories and more with other country music fans!