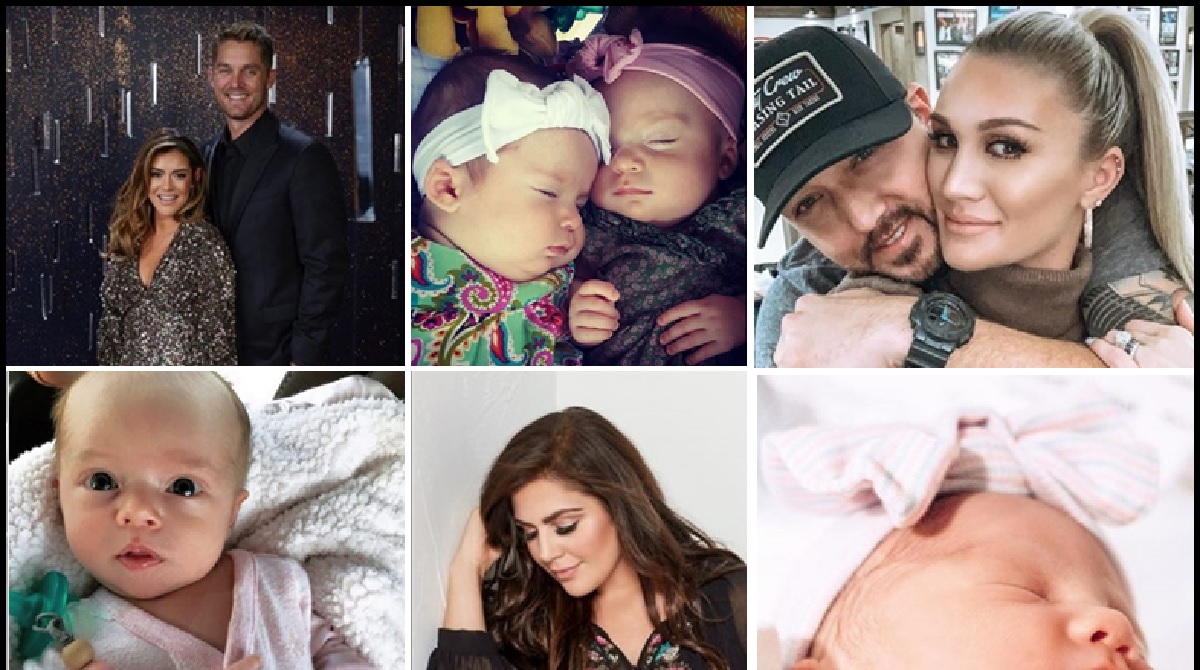 Enjoy watching this video featuring 17 babies of country music stars and get the latest baby and parent updates here. . .

There is a bundle of adorable Country Music babies that joined our world in the past couple of years.  With the blessing of new babies, many artists and their families had extra cause for celebration.  Watch the video below to see 17 of these beautiful babies who joined the country music family and see additional baby and parent updates below.

Carrie Underwood and Mike Fisher – Jacob Fisher came into the world on January 21, 2019.  Carrie and Mike’s youngest child is now one-year-old and big brother Isaiah will celebrate his fifth birthday in February.  Jacob demonstrated at his birthday party that he really likes cake!

Kane Brown and Katelyn – Katelyn Rose Brown and Kane Brown‘s daughter, Kingsley Rose Brown, has made her grand entrance into the world! Yes, the little one shares her mother’s middle name.  Kingsley was born on Tuesday, October 29, 2019.  To celebrate the birth of his first child with wife Katelyn, country music star Kane Brown has released a new song— “For My Daughter”.  Both Kane and Katelyn got inked by Bubba Irwin in honor of their daughter. Kane now has ‘Kingsley’ running down the side of his neck while Katelyn has ‘Kingsley’ on her arm.

Time has wings… fast and furious wings. Blinking not advised.

Kimberly Schlapman and Stephen – In January of 2017, Little Big Town’s Kimberly Schlapman revealed that she and her husband, Stephen Schlapman, adopted a newborn baby girl and named her Dolly Grace.  Dolly Grace is growing up face and joins her sister and daddy in this Instagram post.

Cam and Adam Weaver – welcomed a baby girl as the first child for the couple on Thursday, Dec. 19, 2019.  Cam announced on Instagram, “Lucy Marvel Weaver 💫 breech at 39wks, a next-day c-section (ouch) & here we are… three of us now”.

3 weeks. Less sleep than radio tour. More worry than being broke & trying to get signed. Tears for no good reason and for very good reasons. Feeling higher than the best gig I’ve ever played, with more meaning than the best song I’ve ever written. My mind doesn’t know how to process it all, and my heart has already made itself ready for anything you might ever need 💗 I love you Lucy

Excited to announce that Kristen and I have welcomed a beautiful baby girl…Momma and baby are both doing great, and I wanna thank everyone for the well wishes and love. God is good! 🙏

Dylan Scott and wife Blair – welcomed their second child into the world on August 28, 2019.  Baby girl Finley Gray Robinson made her big debit and big brother Beckett (born in 2017) was on the scene to meet his new sibling.

Beckett loves his little sister and so does momma and daddy. Everyone meet Finley Gray. Born today, 8 pounds 3 ounces and 20 inches long! I’ve watched my wife do this twice now and she is a rockstar!!!

Randy Houser – Randy Houser‘s son made his big debut on Sunday, June 9, 2019 in Nashville! The little one is the first child with wife Tatiana.  Houser also has a 7-year-old son named West from his previous marriage to Jessica Lee Yantz.

Jake Owen and Lacey Buchanan – Country music star Jake Owen and his ex-wife Lacey Buchanan welcomed their only child together, daughter Olive Pearl Owen, into the world on November 22, 2012.  Pearl now has a stepfather and 2 half-sisters! Lacey married David Auston in July 2018 and they welcomed daughter, Elenora, into the world on February 12, 2019.

Happy Fathers Day y’all… I’ve been a very fortunate and lucky man blessed with many beautiful things in this life. There is absolutely no greater accomplishment than the gift of a child and the ability to be a father. Thank you Dad for teaching me what a father is meant to be.

Happy Birthday, Jack!!! Can’t believe this kid is whole year old today AND that he’s gonna have a little brother. He made a beautiful mess breaking the news. We’re super proud and crazy about you, buddy. 💯💪🏼❤️🎂

Baby Luka is officially home! Time to introduce him to Brady 🐶 and Oliver 🐱! #blessed #baby

Chris and Morgane Stapleton – shared news of the birth of their fifth child (a baby boy) on May 12, 2019 via Instagram and the below post shared May 29, 2019.  The couple welcomed twin boys in April 2018 and also has two additional children, a boy and a girl.  Chris and Morgane keep their children names and ages private.

Sweet boy… It’s hard believe almost a month has already gone by. Time flies faster than I ever thought imaginable. My heart is so full!