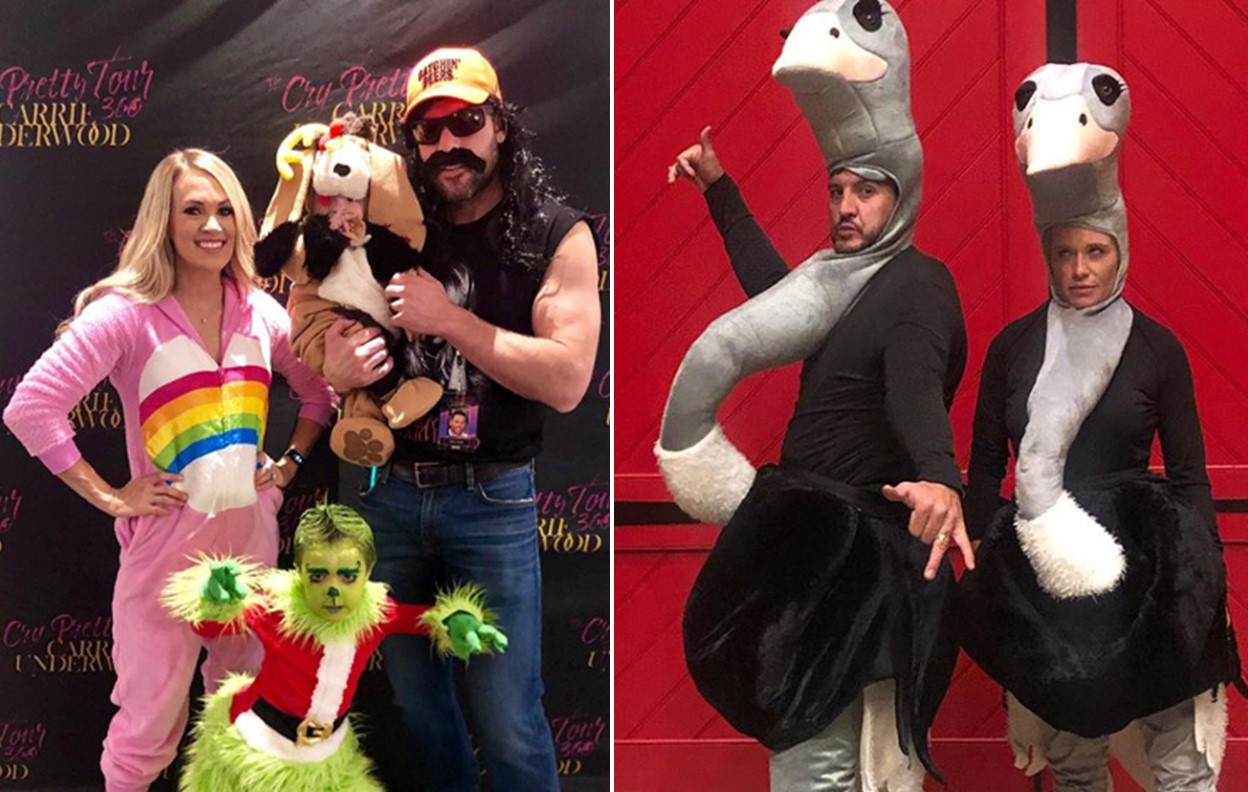 Halloween 2019 did not disappoint! Check out how some of country music's top stars and their families celebrated...

Halloween 2019 has come and gone! Let’s check out some of this year’s best costumes…

HAPPY HALLOWEEN from the Mother of Dragons and John Aldean Snow!

Thomas, Lauren, Willa, and Ada take a trip under the sea!

🎼✨”Somewheeerreee over the rainbow wayyy up higghhh, and the dreams that you dream of once in a lullaby….”✨🌈✨🎼

Hope everyone had a good #Halloween ! Lots of love from Cheer Bear, The Grinch, Max and Buck Daniels…

Luke cheated in the ostrich race…Happy Halloween everybody!!

“The things you do for your kids.” I’m beginning to enjoy Halloween a little more these days thanks to kids, the Akins @laur_akins @thomasrhettakins and @kristaroser #Frozen #HappyHalloween #Elsa #Olaf #Sven #Kristoff #Anna

Alan Jackson talks three daughters’ past costumes: “Aww, I remember some, when they were infants, they had like these little, they looked like a little pea pod, you know, or something. It’s like a little green pea or something. And I thought man, that’s awful. But Denise liked it, and I guess it was cute, but…(laughs).”

Eric Church‘s favorite costume: “My favorite Halloween costume really came, I remember when I got a little older my first year of college, there’s this thing they do every year in Chapel Hill, North Carolina – Halloween on Franklin Street. We drove down from Boone, North Carolina. I had a bunch of friends that went to University of North Carolina, and we didn’t have costumes and didn’t realize until we were on the way that we had to have costumes. So, we stopped at a costume place in Greensboro, North Carolina. It’s Halloween, so there’s a run on everything and couldn’t find anything. And we end up getting sent around, driving  around town. We end up finding this hole in the wall place, but they had the full costume, Sesame Street outfits. The real deal. The real ones [with] feathers and fur. We were Elmo, Cookie Monster and I was Big Bird, and the Big Bird was the actual Big Bird. It’s about 7-foot-4, and you looked out of the body and then you had these straps that went on since the head was a lot higher. There’s a lot of beer involved in Franklin Street, so we get down there and as the night went on, my straps broke, so the head would pivot. And so, I would be walking one way and the head would be facing the other, and it just became this funny…I didn’t know the head was on backwards. I had no idea. I see out of the body, so I’m just kinda walking around and people were talking to my ass-end. [laughs] The whole time people’d come up and start talking and go, ‘Hey, turn around.’ And I’d turn around, and they’d go, ‘No turn around.’ It was a mess. That year, there was no other Big Bird on Franklin Street.”

Dierks Bentley‘s Halloween fireworks: “Oh, when I was a kid, I was all into fireworks. Growing up in Arizona, we couldn’t get ’em, so we’d have ’em shipped in illegally. I still remember the name of the guy we’d call. His name was Joe, and he’d bring in, ship ’em in a package with no writing on ’em. We were all about M-80s in the mailboxes and bottle rocket wars. To me, as a kid, Halloween was fireworks, was blowing up stuff around home. [laughs]”

Josh Turner‘s top family costume: “My favorite family costume was from a couple of years ago when I had my six-and-a-half-month-old beard going, and me and the whole family dressed up as Star Wars characters. So, I was a young Obi Wan Kenobi, Jennifer was Princess Leia, Colby and Marion were Storm Troopers, Hampton was Darth Vadar and Hawk was, I guess, pretty much still a baby, and he dressed up as Yoda. It was pretty classic.”

Happy Halloween! And don't forget to use the Force! #halloween

Luke Bryan‘s favorite couples costume with wife Caroline: “Me and Caroline did one year where I dressed up as the old lady, and she dressed up as, she called herself a dirty old man. So, she went around acting like an old man saying snide comments to everybody. That was a fun one. The main thing is Caroline is big, she loves Halloween and always has.”

Share this look at Halloween 2019 with other country music fans!