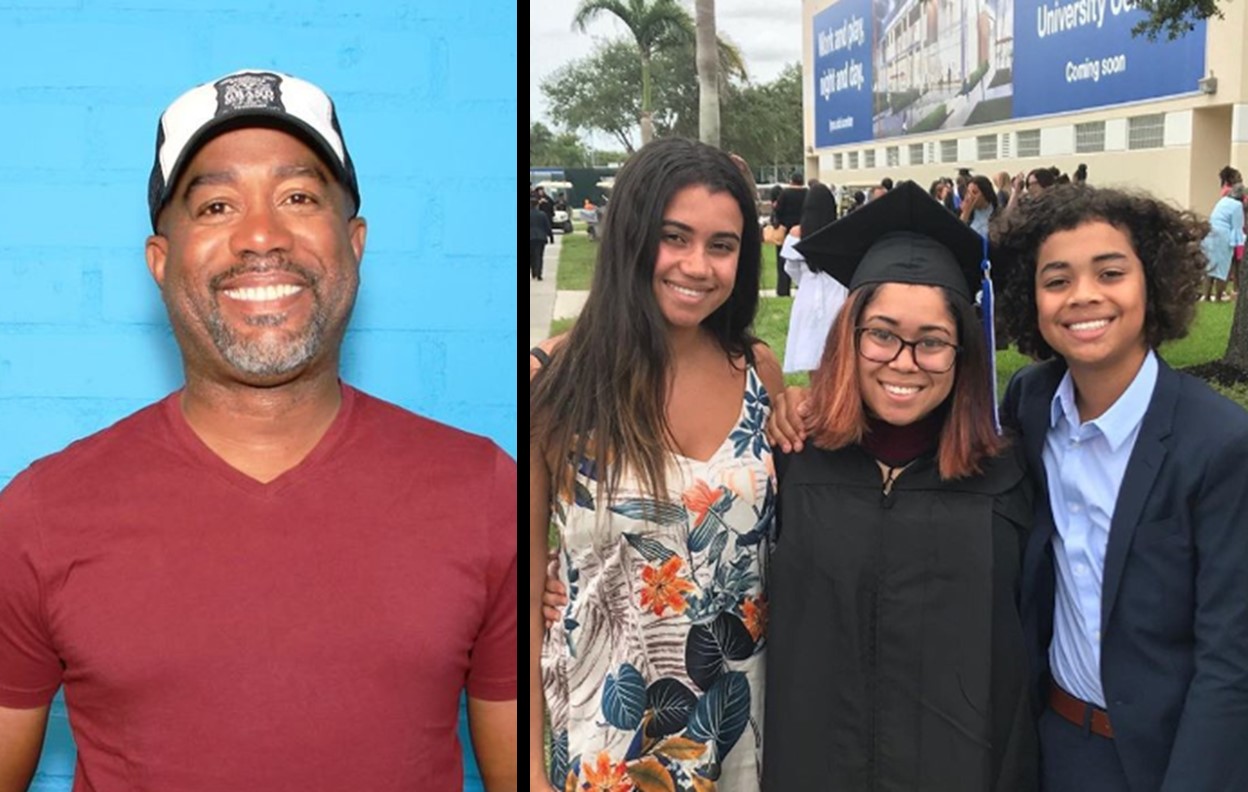 Country music entertainer Darius Rucker's children Carolyn, Daniella, and Jack are the center of his world! Get to know them here...

Country music singer-songwriter Darius Rucker has accomplished a lot in his 54 years on this planet. Above all, the multi-talented artist treasures his wife, Beth Leonard, and his kids Carolyn, Daniella Rose, and Jack. Sadly, Darius and Beth announced their decision to ‘consciously uncouple’ while remaining close friends and parenting partners on July 11th. Get to know Darius Rucker’s children below!

Carolyn (born April 21, 1995) is the 25-year-old daughter of Darius and his former girlfriend Elizabeth Ann Phillips. In May 2018, she graduated from college! Like her famous father, she also enjoys singing and covering popular songs.

Daniella (born May 16, 2001) is Darius and Beth‘s eldest child together. Yes, she was named after famous football legend Dan Marino! The 19-year-old is currently in college and attending New York University. While at home with her family, Dani released a cover of Jypsi’s “I Don’t Love You Like That.” The song, written by Liz Rose and Stephanie Chapman, was produced by Darius and also features his backing vocals. Listen to her sing here.

I am so proud of this one. She has finished, actually did her entire freshman year of college from the dining room table. She has woken up everyday with a super positive attitude and forged forward. This time has been a sacrifice, like it has for all of us. But her ability to make the best of it, is a testament to her grace and beauty. We still don’t have a game plan for the fall, but hopefully it will all work out for some sort of an NYU experience. 💫✨💜🙏🏻 love you @dani_rucker. I know times are heavy but your resilience is amazing ✨

Jack (born October 27, 2005) is Darius and Beth’s youngest child and the star’s only son. The 16-year-old is wild about golf and often plays with his father!

You had my heart from day one. I can’t believe you are 16 today. I remember it like it was yesterday. Your heart is bigger than the earth. You are truly loved by all. Keep spreading the love and kindness that exudes out of you. You make your momma proud. Also the new car was a bet his dad made with all of his children…. If they could beat him in golf by their 16th birthday he would buy them any car they wanted( well mom approved). Jack obviously beat his dad( at 13) way to go jack jack! Happy happy birthday ✨💜☀️

Although each of his children show musical ability, Rucker would rather them all find success outside of the entertainment industry.

“If they were to ask me what I wanted them to do singing would be the last thing I would want them to do. Go be an engineer. Go be a doctor. Go get a real job. Get a family and live a great life…” Rucker revealed in a past interview with Life of Dad.

This man is an amazing dad! He may not of had a father as a great role model, but his mother did a beautiful job of showing him what love looked like. He has the biggest, kindest heart of anyone I know. He would do anything for his kids and they are lucky to have him. To all the fathers with us and not, I wish you a day filled with pride as your love reflects back to you through the eyes of your children! ✨💜✨☀️

As for what he wants for his three children, it’s simple— have faith and be good people.

“That love of God is so important. My kids are great kids. I always stress to be good people. Be good to others. For me I tell them that it is easier to be nice than to be a jerk. I say it to my kids all the time. That is one of the things that I remember from growing up. My mom said how important it was to be a good person. That is one thing that I truly try to put into their lives. It is just second nature. It is to be nice and help folks,” the South Carolina native sagely explained.

Reunited 💜💜💜 taking pictures pains them so. Mom is annoying. They look beautiful and i get caught with the come on babies ✨💫

Share this closer look at Darius Rucker’s children with other fans!