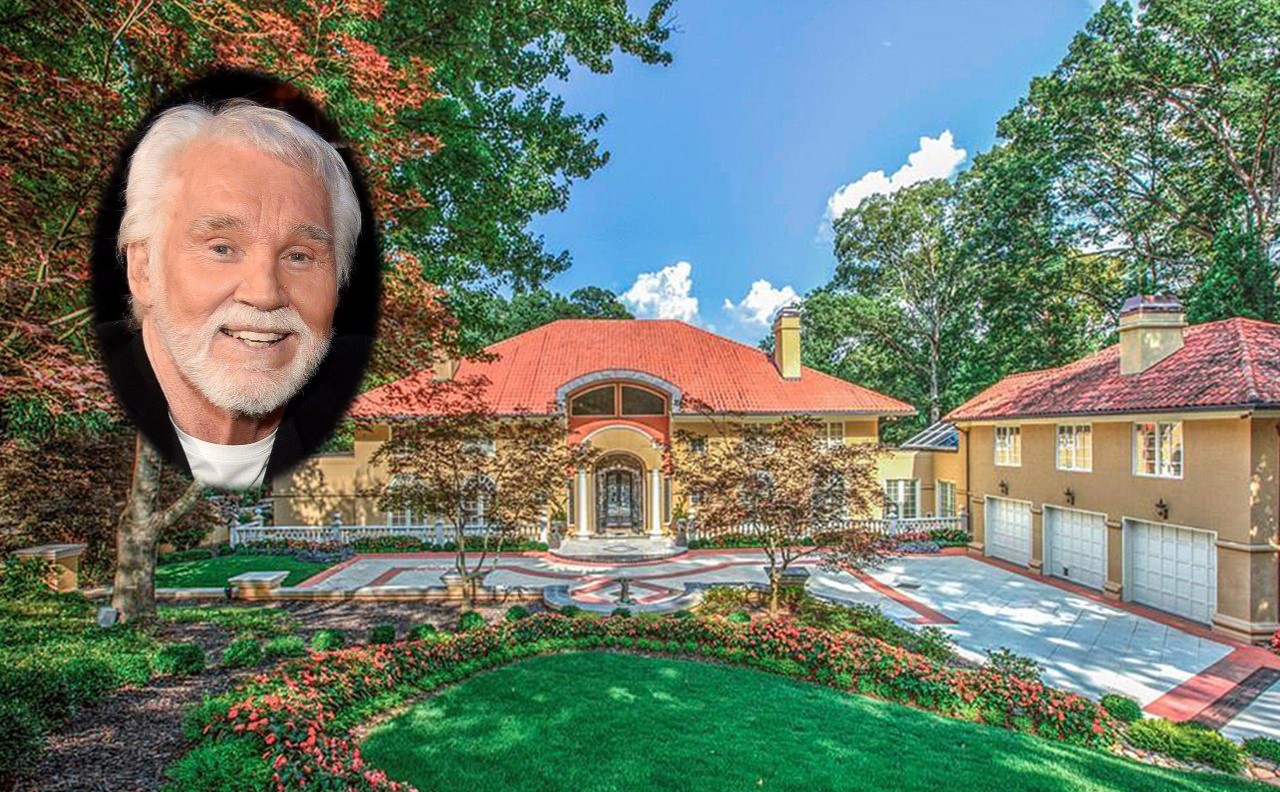 Country music icon Kenny Rogers' former Atlanta-area mansion is the definition of opulent. Take a tour of the estate here!

Country music legend Kenny Rogers recently sold his Atlanta-area mansion for $2.38 million. The 13,000-square-foot mansion resembles a Mediterranean palace and touts six bedrooms, eight full and four half bathrooms. Features include a conservatory, game room with full bar, movie theater with stadium seating, and ten fireplaces. As reported by Variety, “The Gambler” bought the estate in 2013 for $1.5 million.

Take a moment and take a look at Kenny’s jaw-dropping former property!

This Entry Makes A Big Statement

Ornate Double Staircases Border the Foyer  Two Islands in the Kitchen Stream…   Enjoy the Beauty of the Outdoors in Comfort  Watch your Favorite Films in Luxury  The Grounds are just as Impressive as the Mansion’s Interior Wow. The new owner of this place nabbed quite the spread!

In April, Rogers scrapped the remaining dates of his The Gambler’s Last Deal farewell tour due to health issues. The country icon has been married to wife Wanda Miller Rogers for over twenty years and they have identical twin teenage sons, Jordan and Justin, together. We hope Kenny’s heath problems are under control and that he is enjoying spending more time with his loved ones.

Share this beautiful home with other fans of the star and enjoy Kenny’s “The Gambler” below!

On a warm summer’s evenin’ on a train bound for nowhere,
I met up with the gambler; we were both too tired to sleep.
So we took turns a starin’ out the window at the darkness
‘Til boredom overtook us, and he began to speak.

He said, “Son, I’ve made my life out of readin’ people’s faces,
And knowin’ what their cards were by the way they held their eyes.
So if you don’t mind my sayin’, I can see you’re out of aces.
For a taste of your whiskey I’ll give you some advice.”

So I handed him my bottle and he drank down my last swallow.
Then he bummed a cigarette and asked me for a light.
And the night got deathly quiet, and his face lost all expression.
Said, “If you’re gonna play the game, boy, ya gotta learn to play it right.

You got to know when to hold ’em, know when to fold ’em,
Know when to walk away and know when to run.
You never count your money when you’re sittin’ at the table.
There’ll be time enough for countin’ when the dealin’s done.

Now Ev’ry gambler knows that the secret to survivin’
Is knowin’ what to throw away and knowing what to keep.
‘Cause ev’ry hand’s a winner and ev’ry hand’s a loser,
And the best that you can hope for is to die in your sleep.”

So when he’d finished speakin’, he turned back towards the window,
Crushed out his cigarette and faded off to sleep.
And somewhere in the darkness the gambler, he broke even.
But in his final words I found an ace that I could keep.

You got to know when to hold ’em, know when to fold ’em,
Know when to walk away and know when to run.
You never count your money when you’re sittin’ at the table.
There’ll be time enough for countin’ when the dealin’s done.