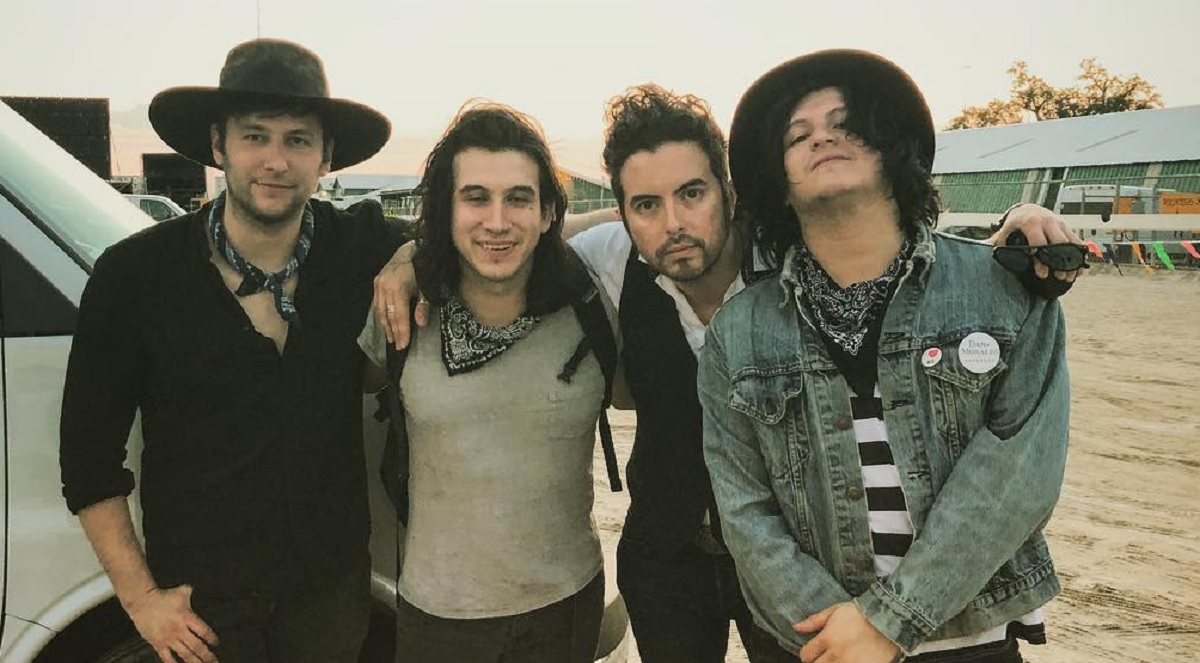 The Last Bandoleros .band formed in 2014 and has been on a roll ever since.......Learn more here.

The Last Bandoleros band is known for fusing Tex-Mex and rock & roll with some high spirits and a dose of studied cool.  Learn more about this popular band below.

Where is the Band from?  Both Fuentes and Navaira were raised in San Antonio, Texas, and Navaira’s father was a Conjunto musician Emilio Navaira, Sr. Fuentes and Navaira were raised on musical influences of classic Texas artists like Doug Sahm and Flaco Jimenez, as well as classic rock. James hailed from New York City, and had a taste for roots rock and Brit-pop with jangly guitars. Fuentes and Navaira had both worked for a while at a recording studio in San Antonio, where a producer suggested Jerry hire Navaira and his brother, drummer Emilio Navaira, as his rhythm section. Jerry relocated to Brooklyn, New York, where he met Derek James. Fuentes and James started writing tunes together, and soon Diego Navaira joined them. As Jerry, Navaira, and Derek developed a distinct sound and style, they began playing out regularly in 2014, with Emilio as their drummer for live dates. The Last Bandoleros were formed and the rest is history.

What are the The Last Bandoleros top songs?  In 2015, they released a pair of digital singles, “I Don’t Want to Know” and “Where Do You Go”.  These songs captured fans of their interesting mix of honky tonk and Tex-Mex,   The band signed with Warner Bros. Nashville for a recording contract, and the completd a reissue of “Where Do You Go” .  View their top songs and music videos below..

Enjoy the acoustic performance of The Last Bandoleros video for “Let’s Run Away”.

Here are some of The Last Badnoleros top songs (click any link below to view the music video for each song):

Other Interesting Facts about The Band

The band toured and performed with Sting

The band explained  that touring with Sting is “like going to school with the coolest teacher.”  “We’re inspired by him every day,” said bass player Diego Navaira. “We learn from him every day.”  “I think the Sting tour is a platform for our music to be introduced all across the world, which isn’t an opportunity baby bands get, especially not under the guidance of a superstar like Sting,” explained singer/guitarist Derek James. “It’s been incredible to play our music to thousands of new potential fans each night.”

Sting also added his son (Joe Sumner) ot the tour as an opening artist and a background singer.  The Last Bandoleros follow Sumner with five songs of their own as well as providing background harmonies throughout Sting’s setlist.  Singer/guitarist Jerry Fuentes said that working with Sting pushed the band harder than members would push themselves.  “Seeing the way he runs his band, his personal time, how professional he is, I think that has rubbed off on us,” Fuentes said. “We’re like, ‘Guys, we need to get together and rehearse.’”

The Last Bandoleros appeared on Jimmy Kimmel Live in 2016 and performed their song “Where Do You Go”.

Like what you heard? Check out The Last Bandoleros at your preferred digital destination: