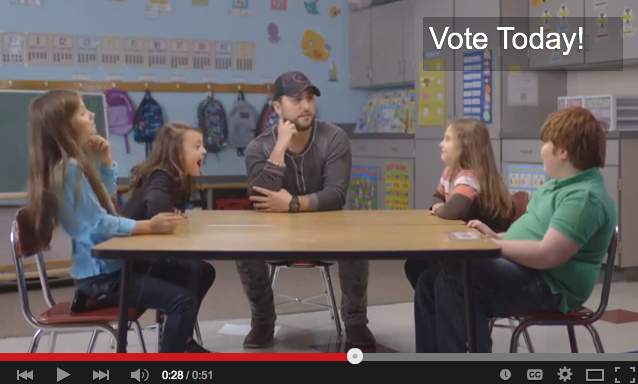 Tyler Farr has released a hilarious video to help gain votes for the Academy of Country Music's 'New Artist of the Year' award! Check out the full story here!

Tyler Farr is on the campaign trail hoping for your vote. Along with seven other new artists, Farr is looking for you to vote him the Acadamy of Country Music’s ‘New Artist of the Year.’

Farr is working hard to claim that top spot and he has even released a campaign video. In the video he asks children at a school if he should win an ACM award, and they respond with some very funny answers. You should definitely recognize the similarities to the AT&T commercials.

Watch the full video below!

Tyler’s campaign slogan is “It’s Farr too easy,” which seems to fit his cause well. If you’d like to show your support, you can easily vote for Tyler HERE.

Farr wants to remind you to vote for him daily, if possible, until February 10th, which is when the first round of voting closes. The final round of voting will begin on April 8th and end on April 19th.

Be sure to tune into the ACM awards on CBS, April 19th at 8/7c, to see who takes the crown. And check out Tyler‘s website HERE, to find tour dates and more news about the up and comer.