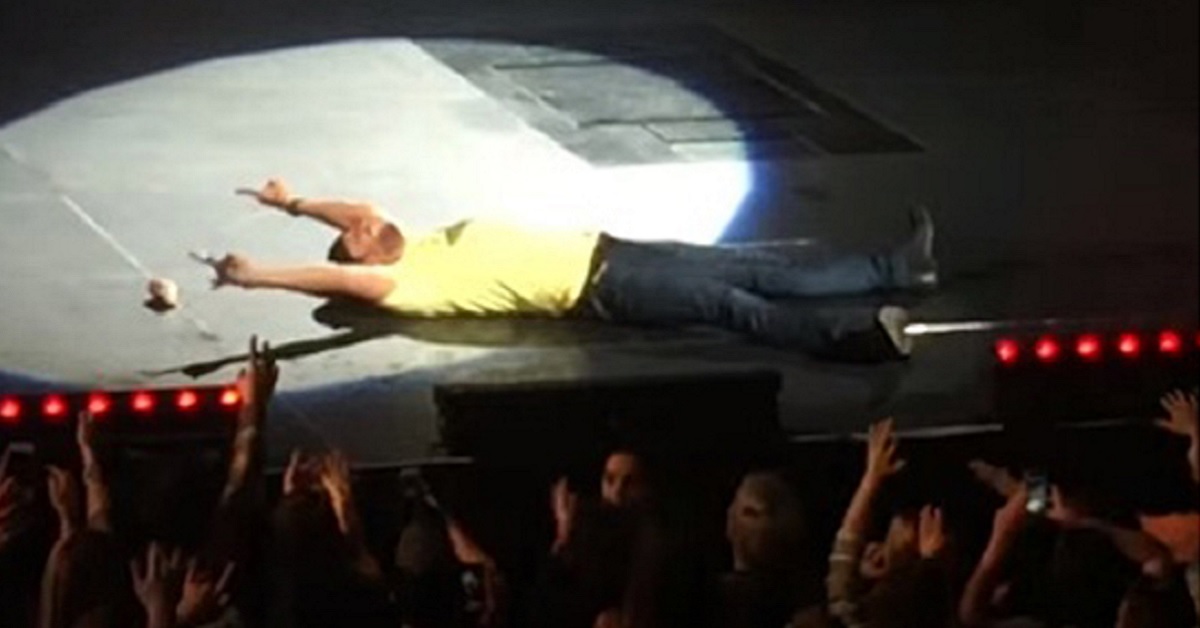 Country Music Stars fall on-stage and sometimes it is minor and other times can be more serious.  Here are 12 of the most epic country music falls while performing on-stage.

12.  Dierks Bentley fell on stage at one of his concerts on Valentine’s Day in Gainesville, Florida. The professional didn’t even skip a bit and continued to sing while laying flat on his back.

11. Scotty McCreery gracefully stepped off stage only for fans to catch him while he was on tour for Brad Paisley in Bethel, New York! (Skip to 8:16)

10. Brad Paisley started to run on stage with his guitar while his legs weren’t having it. The singer ended his show in Charleston, South Carolina face first.

9. Garth Brooks wiped out as he was climbing on one of his stage props mid performance of an OKC concert.

8. Shania Twain sure knows how to make an entrance! During the 2011 CMT Awards she slipped as she was just about to take the stage.

7. Luke Bryan was getting hyped up in Charlotte, North Carolina as he was singing Macklemore’s “Ceiling Can’t Hold Us,” when his foot lost the stage causing him to take a tumble into fans.

6. Tim McGraw found a hole in the floor of his stage at Harvey’s Lake Tahoe. The singer didn’t skip a beat as he continued to sing while getting back up on stage.

5. Thomas Rhett was getting his groove on while singing “Southside” in Charlottesville, Virginia when he missed a step and fell into fans’ arms.

4. Keith Urban slid right down the stage in Biloxi, Mississippi while getting his fans ready to sing.

3. Carrie Underwood thanks her 5-inch heels for getting caught in her sweater which ultimately made her fall at a Texas concert.

2. Tyler Farr face dives while stepping onto another stage in Glen Allen, Virginia.

1. *DRUM ROLL. The country singer that out beats any other country artist in his number of falls on stage is inevitably…..Luke Bryan!! Yes, another Luke Bryan fall because he is the King of falling on and off stage. While trying to catch a beer behind his back in Indianapolis, the renowned klutz took too many steps and ended up, yet again in fans’ arms.