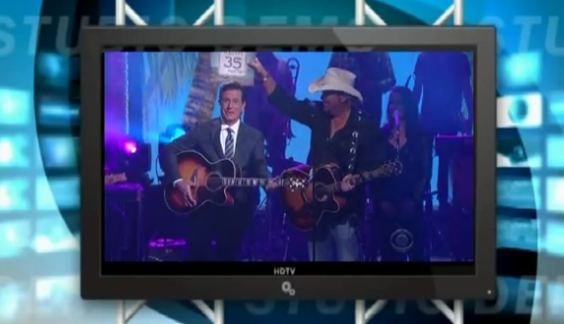 Toby Keith helped Stephen Colbert celebrate the first week of his new Late Show With Stephen Colbert on Thursday night (Sept. 10) by debuting a brand-new song, “Rum Is the Reason.”

Toby Keith has released his third single from his upcoming album 35 MPH Town, titled “Rum Is The Reason” and decided to debut it on the new Late Show With Stephen Colbert this past Thursday night (Sept. 10).

Even though we are heading into the Fall season, Keith wants to keep us in the summer mood with this beachy song that weaves some heavy issues into a common theme that rum is the reason some things never get done.

“While Russia was brawlin’ / I think that old Stalin was callin’ for a vodka martini / While the world hid in fear, ol’ Hitler drank beer from a stein / Eating sauerkraut and wienies …
“I ain’t gettin’ much done, but I’m havin’ fun / Sailing on the deep blue sea / My whole body goes numb from a bottle of dark rum / And the sun sinkin’ down on me / Yeah, my catch of the day is tall Cuba libra

…Rum is the reason pirates never ruled the world.”

Toby Keith and Steven Colbert go back to Colbert’s old show, The Colbert Report, where Keith was a frequent guest. Now, Keith is continuing his support of Colbert by debuting his new release on Colbert’s new program.

Colbert also helped induct Toby Keith into the Songwriters Hall of Fame back in June where he said “Once you listen to what he has to say and sing, everybody has a good time,” Colbert says of Keith during his induction speech. “… Toby, the dynamic performer, is unapologetically patriotic, opinionated, brash and often controversial, resonating [with] legions of fans by writing up their lives in a very real way …”

On Thursday, Keith presented Colbert with an acoustic guitar, one of Keith’s own Signature Takamine guitars.

“You looked good in that cowboy hat when you inducted me, and the boots, so I got you a guitar now,” Keith told Colbert.

“Oh, yeah, now I just have to learn a second chord,” Colbert joked.