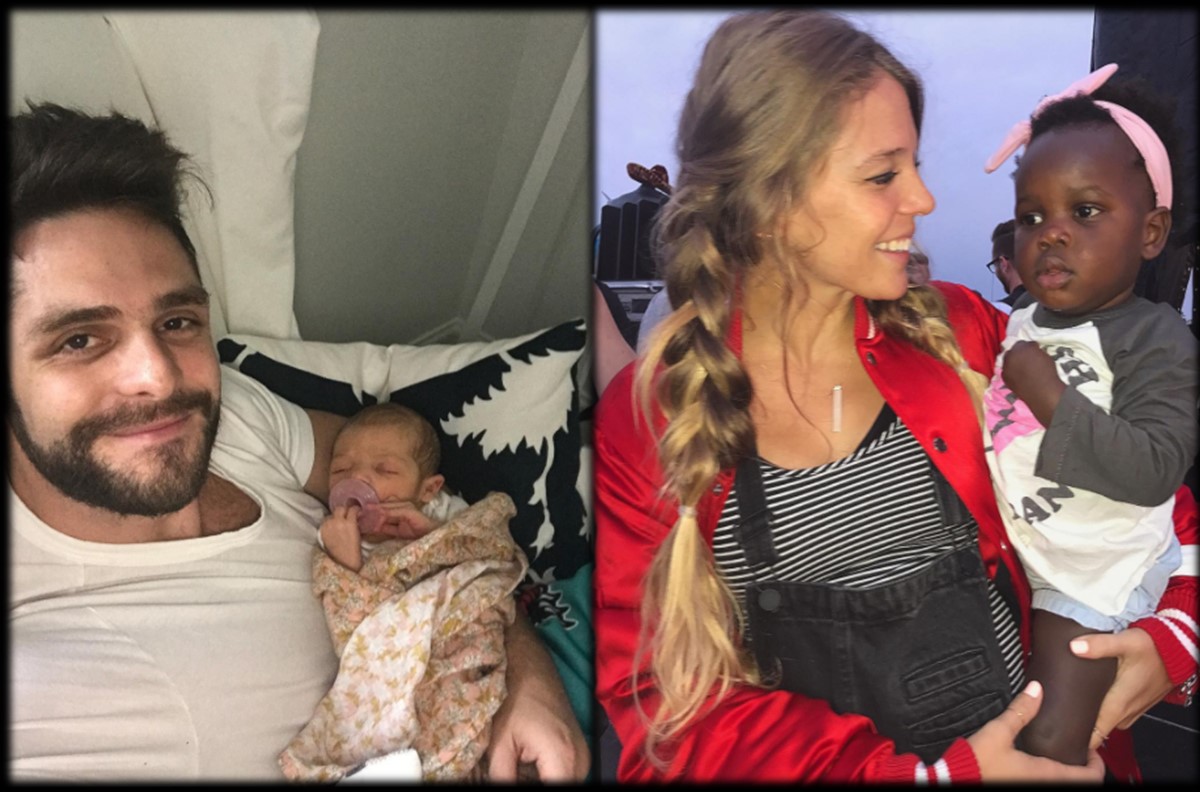 With the birth of his newest daughter, Ada James, Thomas Rhett talks about how he juggles his music career and two daughters at home.

The couple adopted 21-month-old Willa Gray from Uganda in May after meeting her through their volunteer work with 147 Million Orphans. Lauren got pregnant around the time they started the adoption process, so they just welcomed their second daughter, Ada James, on August 12th. They’re unbelievably happy to expand their family, but now they are busier than ever!

“It’s pretty intense because I feel like when one of them goes to sleep, the other one wakes up and vice versa,” Thomas Rhett shared with Entertainment Tonight. “We’re figuring it out as we go, and it’s been a fun journey this far.”

While he admits that he isn’t an expert at fatherhood yet, he is excited to have two girls at home that are living and learning along with him. The challenge comes with Rhett’s successful career as he learns to juggle the two things that mean the most to him: music and family. “We’re just excited to start to learn how to be better and better parents every day and get the kiddos out on the road.”

The ACM Award winner adds that he started giving music lessons to his newborn daughter very early on.

“I remember playing a ton of stuff to Lauren’s stomach ’cause my dad told me he played The Rolling Stones and Led Zeppelin on my mom’s stomach before I was born,” Thomas Rhett said regarding his talented singer-songwriter father, Rhett Akins. “I’m convinced they hear that stuff and they come out and maybe later, when they’re 13 or 14 and they hear it, they kind of feel something because they heard it in the past.”

Thomas Rhett wants his children to feel connected to music, but he isn’t quite sure if he wants them to follow in his footsteps and pursue it as a career.

“I would persuade them probably not to do it,” he said. He added, “My dad told me the same thing. It’s a tough business for sure, and it’s very competitive and takes a lot of your time. But at the same time, I can’t imagine doing anything different. So if they were that passionate about it, I would be super supportive.”

The growing family shared cute pictures of baby Ada after her arrival. So sweet!

Last night at 10:28 PM Ada James Akins was born and it was truly the most amazing thing I have ever experienced. I can't believe that we have two daughters!! My wife @laur_akins labored almost 36 hours😳She is by far the strongest human being I have ever met and I have a new found respect for moms around the world. We are so excited that Willa Gray has a baby sister! Thank you Lord and everyone for the prayers🙌🏼 #outnumbered

Now a father of two, Rhett opened up to People about the philanthropic family values he shares with wife Lauren and how he plans to introduce his children to activism. He is the new face of the charity organization Outnumber Hunger, whose goal is feeding local families. Rhett wants his daughters to get involved with volunteer work at a young age.

“I’m looking forward to, at a very young age, introducing my kids to our lifestyle,” he told the outlet. When his girls are old enough, he hopes to bring them over to Africa, Haiti or Mexico and personally experience how the rest of the world lives.

“We are very fortunate, but there are a lot of people that aren’t,” Rhett added. “Lauren’s been to Haiti three times, and between the both of us, I feel like we’ve been to Uganda eight times this year, so we’ve really seen what severe poverty and malnutrition looks like.”

Thomas Rhett has been steadily unveiling new tracks from his upcoming album Life Changes, which will drop on September 8th. Be on the look out for his new music and check out his new single, “Sixteen,” below!

Be sure to share this update with other fans of this cute family!