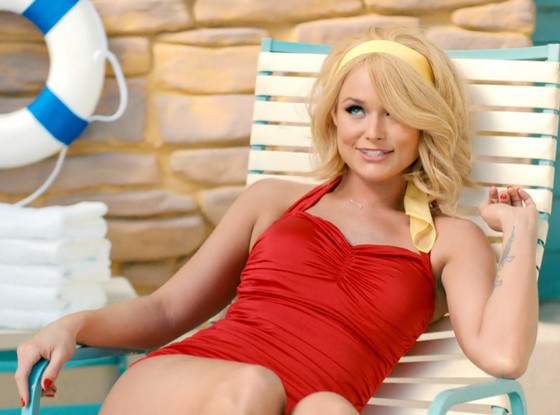 Glamour Magazine caught up with Miranda Lambert on the red carpet at the ACM awards and found out the meaning behind her hit song.

You can’t help but love Miranda Lambert‘s newest single “Little Red Wagon”. The song seems to capture Lambert’s defiant Texas-bred persona and the video to go along with it does nothing but back that up with an adorable red one-piece swimsuit to boot.

Many fans have wondered though, what exactly does the “little red wagon” stand for? There are no Radio Flyers in the video!

“I think it’s just about a state of mind,” says Lambert. “You know, [like], ‘I’ve got this on my own. I’ve got swagger…I think it’s just sassy, and it’s up for whatever interpretation you have as a person.” So there you have it.

If you watched the ACMs, you saw Miranda clean up most of the major categories (Song of the Year for “Automatic,” Album of the Year for Platinum, Female Vocalist of the Year, Milestone Award recipient), but she was the only female nominated for Entertainer of the Year.

“People are asking all the time why aren’t there more females [in country music]. I think there’s a lot of great guy artists right now and they’re having their moment, and it will go through phases, but there’s room for all of us.” Lambert notes.

“It makes me so proud to have a spot here and to be waving that flag for the girls. There’s so many great female artists that have paved this way for me, and there’s so many coming along behind us. I just feel excited about where country music is going to go and all the female artists on the way up. I’m so thankful for my job, and I love all of the guys too.”