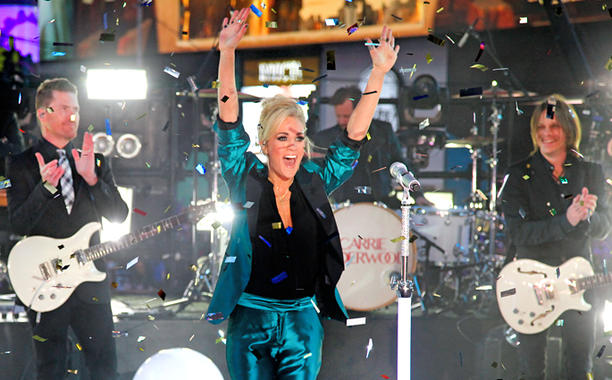 Carrie Underwood closed out 2015 with a show-stopping performance on Dick Clark’s Rocking New Year’s Eve, hosted by Ryan Seacrest. Underwood kept everyone involved in her night by posting some amazing photos to her social media accounts. The night was double special because it was the anniversary of her first date with husband Mike Fisher, which Underwood highlighted by posting a #tbt photo (see below).

The “Smoke Break” singer looked stunning in an emerald green satin pant-suit as she sang her heart out to the crowd at the iconic Times Square in New York City. She played a medley of her top hits, including “Smoke Break”, “Heartbeat“, and “Before He Cheats” much to the excitement of the huge crowd.

“there’s nowhere else I’d rather be than New York’s Times Square, one of the most magical places in the world, to ring in the New Year,” said Underwood. “It’s going to be a memorable night, and I can’t wait to celebrate with the world!”

Her makeup was also on point with striking cat eyes, glittering eye shadow, and a messy up-do with her famously blonde hair. All in all, it was a perfect end to a pretty great year for Carrie Underwood. Watch her and Ryan Seacrest in the video below:

2015 was the year that Carrie Underwood became a mom to son Isaiah with husband Mike Fisher. She also released her massively successful album Storyteller, scored the 21st of her 22 #1 singles with “Little Toy Guns” (from her Greatest Hits: Decade #1), and achieved RIAA Gold certification on Storyteller.

Storyteller also notched a historic Billboard Chart debut when Underwood became the only artist in the chart’s 51-year history to have each of her first six albums enter the chart at #1.

Underwood will kick off her Storyteller WORLD Tour on Jan. 30 in Jacksonville, Florida. The tour will last well into May of 2016. Each of Underwood’s three previous headline arena tours, 2008’s Carnival Ride Tour, the Play On Tour in 2010, and 2012-2013’s Blown Away Tour played for over one million fans.

When the Blown Away Tour wrapped in 2013, Carrie had performed 112 shows in 110 cities across three continents and six countries, including sold-out shows at London’s prestigious Royal Albert Hall, and two nights at the Sydney Opera House in Sydney, Australia.

This time around will be a little different, she wasn’t a mother before. We are sure that now that Underwood is back full-force into her career, we will see her concentrate on finding balance among the chaos and keep her responsibility as a mother in the forefront. If anyone can do it, she can!

No matter what, 2016 will be another amazing year for the fabulous Carrie Underwood.

Below are some of the photos Underwood shared on NYE 2015:

Not only is it #NewYearsEve but it’s also a very important anniversary for me and @mfisher1212 #FirstDate #FirstKiss Our lives were forever changed from that night on. I wouldn’t change a thing! I love you baby! #TBT