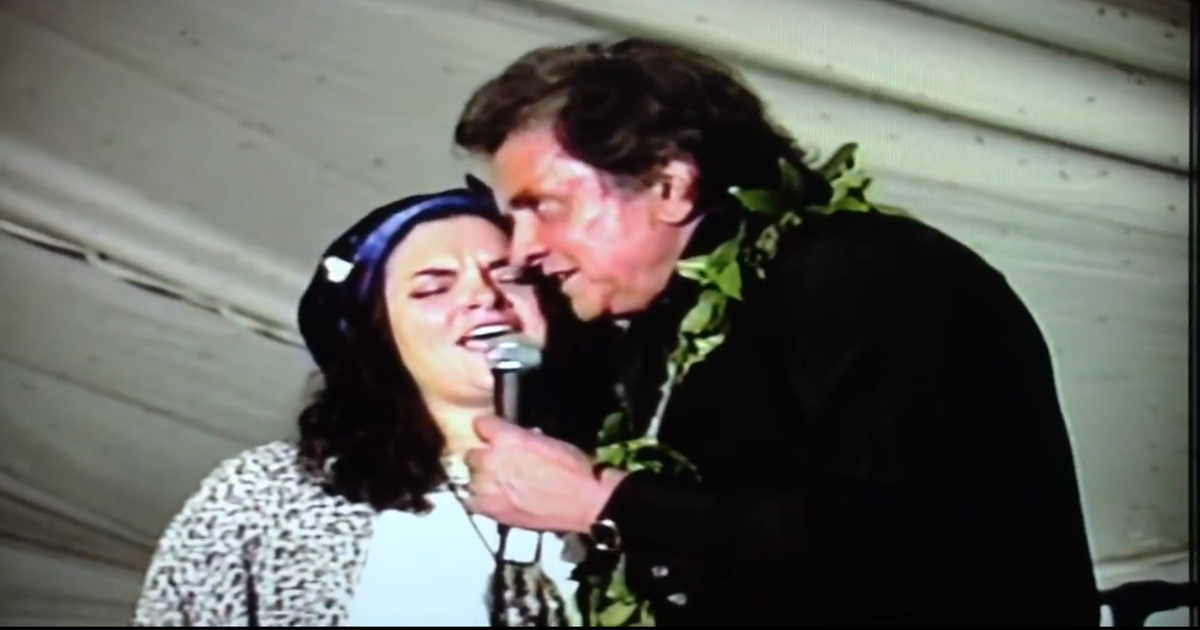 Watch Rosanne Cash and Johnny Cash perform a duet of "Tennessee Flat Top Box" during a dinner party in this rare footage!

The Rosanne Cash Tennessee Flat Top Box song was originally recorded and released as a single by country music icon Johnny Cash in 1961. The song saw immediate success, reaching #11 on the Billboard country singles charts and #84 on the pop charts.  The song details the story of a young boy aspiring to be a country singer.

In 1987, Johnny’s eldest daughter Rosanne Cash recorded a cover of the song and released it as a single for her album Kings Record Shop. Her rendition of “Tennessee Flat Top Box “saw immediate success, peaking in February of 1988 as a No. 1 hit.  The music video became the most popular of Rosanne Cash’s career with over 11 million views as of February of 2022.

Watch Rosanne’s music video and see her perform this song with her father below.

Rosanne’s cover was credited for mending her strained relationship with her famous father. Johnny once told his daughter that her success with the tune was one of his greatest joys.

Watch a home-style video of Rosanne and Johnny Cash performing “Tennessee Flat Top Box” for a dinner party at their home in 1989 and see the written lyrics below.

In a little cabaret in a South Texas border town,
Sat a boy and his guitar, and the people came from all around.
And all the girls from there to Austin,
Were slippin’ away from home and puttin’ jewelery in hock.
To take the trip, to go and listen,
To the little dark-haired boy who played the Tennessee flat top box.

Well, he couldn’t ride or wrangle, and he never cared to make a dime.
But give him his guitar, and he’d be happy all the time.
And all the girls from nine to ninety,
Were snapping fingers, tapping toes, and begging him: “Don’t stop.”
And hypnotized and fascinated,
By the little dark-haired boy who played the Tennessee flat top box.

Then one day he was gone, and no one ever saw him ’round,
He’d vanished like the breeze, they forgot him in the little town.
But all the girls still dreamed about him.
And hung around the cabaret until the doors were locked.
And then one day on the Hit Parade,
Was a little dark-haired boy who played the Tennessee flat top box.

Share this special father-daughter moment with other Rosanne Cash and Johnny Cash fans!