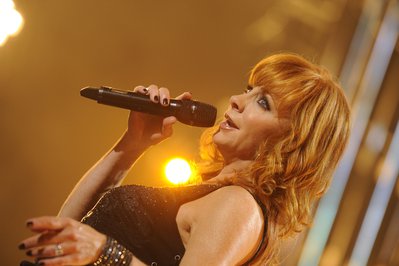 Reba McEntire's "Just Like Them Horses" is the song featured in her latest music video.

Reba McEntire lost her father in October of 2014 and she is paying tribute to him in an emotional video for her song “Just Like Them Horses”. The video was filmed on the McEntire’s land in Chockie, Oklahoma where McEntire was raised for 21 years.

“Those old hills mean a lot to me,” McEntire explains. “I lived there 21 years, and they still call me back time after time.”

The video is filmed in black and white and begins with a very sincere McEntire explaining the purpose of the clip.

“How do you say goodbye?” she says in a voice-over in the beginning of the video.

The song came to McEntire via Liz Hengber who sent her the CD of “Just Like Them Horses” when she was screening tracks for her Love Somebody album.

“The minute I heard it, I knew I wanted it played at Daddy’s funeral,” McEntire says.

“When my producer Tony Brown heard it, he loved it so much that he insisted on putting it on the album.”

With the intention of playing the recorded version at the funeral, McEntire ended up singing the song live which gave it a much more personal touch for such an important event. Her favorite line of the song is, “Just like them horses / Now it’s time to run.”

“He did,” she says of her father. “He ran all the way to heaven. Just like them horses.”

The music video for the emotional song features McEntire’s mother in the beginning scenes and of course the horses that her father spent his time raising.

“I dedicate this video to Daddy. His life was horses, cattle, land, rodeo and business,” McEntire reflects.

“Daddy did a lot of traveling in his life. When he wasn’t rodeoing or buying cattle, he was working hard on the ranch. I took him to Europe and Australia. On one of those trips, he said, ‘If I ever get home, I’m not gonna go past the mailbox.’”

Watch the music video for “Just Like Them Horses” below!

REBA MCENTIRE -GOING OUT LIKE THAT
View Comments (0)
Country Fancast ×