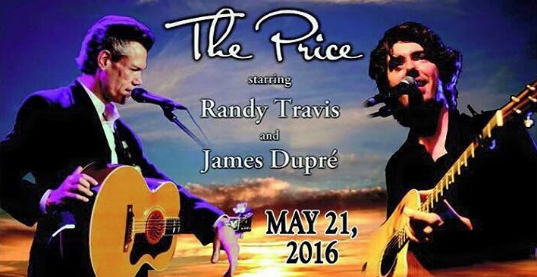 See the trailer for this new country music movie here!

Randy Travis and James Dupre from The Voice are co-starring in a new movie called The Price. The Price is a story of a young singer songwriter (James Dupre) who finds out a famous country singer (Randy Travis) is his father.

He then sets out to meet and reconnect with his father and find common ground in country music.

The movie is being produced by Trumpett Productions and will be released on DVD June 15th. This was the last acting role by Randy Travis before his unfortunate stroke so be sure and support this film.

The movie also stars Travis’ real-life wife, Mary, as an former girlfriend who gave birth to his son 20-something years earlier. The son, played by The Voice alum James Dupré, is an upcoming country star that wins a TV singing competition. Travis’ and Dupré’s character at first don’t get along and then eventually find forgiveness, as Travis’ character faces his deathbed.

Watch the trailer for the coming movie below.