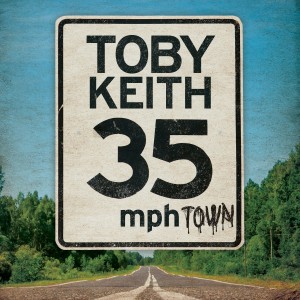 The follow up album to Drinks After Work from Toby Keith will be released on October 9th called “35 MPH Town” and Keith fans couldn’t be happier!

The “Drunk Americans” singer announced the album almost a year ago and already released one track from the new project 35 MPH Town. Judging by the title, we can expect an album that goes back to down-home roots. We have all slowed down on the interstate to drive through these towns without giving them a second thought, the title is a clever homage to the American small town. Although the first two releases from the album are a bit tongue-in-cheek, in typical Keith style.

“We just raise up our glass/ We don’t give a rat’s ass/ Democrat or republican, We’re happy to be here and that you can see we’re just all drunk Americans” Keith sings in the cartoon-like video.

The record’s second single and title track “35 MPH Town”  is climbing the charts and it is a complaint to what is happening in American small towns these days.

“Oh, we can’t blame the babies for growing up lazy and crazy / It ain’t them that let them down / If they ain’t stealing, they’re suing / Why work when we’ll give it to ‘em?” Keith sings in “35 MPH Town.”

A majority of the album’s cuts were written by Keith, and several were penned in collaboration with Bobby Pinson, Scotty Emerick and Rivers Rutherford. Keith co-produced the record with Pinson.

While Keith has stayed relatively quiet about the project, and there are still three months to go until its release, fans can hear the new music on his current tour. The 2015 Good Times & Pick Up Lines Tour is midway through its run; it launched on May 29 and will wrap up just before 35 MPH Town is released.