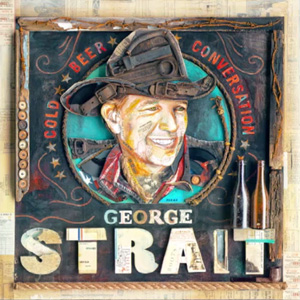 During a press conference it was announced that George Strait is releasing a new album, "Cold Beer Conversation," on Friday (Sept. 25th).

It looks as though retirement does not agree with George Strait. It was announced today that not only will the iconic Texas-native be playing live shows again but he will also be releasing a new single to radio tomorrow (Sept. 23rd) and a brand-new album on Friday (Sept. 25th)!

The album will be named Cold Beer Conversation and is the followup to 2013′s Love Is Everything, which featured “I Got a Car”. Strait co-produced the new album with Chuck Ainley for George Strait Productions and called on some of the top songwriters in Nashville for the 13 tracks, including Bill Anderson, Jamey Johnson, Brandy Clark, Shane McAnally and Tom Shapiro.

Strait and his son Bubba also co-wrote some of the new songs, including “Let It Go” which was released this past April as a radio single.

“I’m really, really proud of this new album,” Strait says. “I think it’s a great record. I always say this; I think it’s one of the best records I’ve done. I always shoot for that … you’ve gotta go in the studio thinking that way. So I’m very excited about that.”

The new album is part of a five-album deal that he signed with longtime label MCA in 2013.

“In 1981, when I signed with MCA Records, it seems like yesterday,” Strait recalls. “I think I’ve been at MCA longer than most people in this room have” Strait said during a press conference today (Sept. 22).

Strait also revealed plans for a series of concerts in the new Las Vegas Arena when it opens in 2016, where Kacey Musgraves will be the opening act.