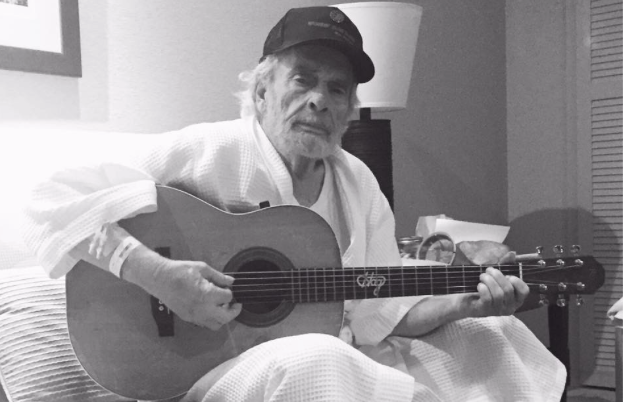 Merle Haggard is still on the mend from the pneumonia he got in December. Hear it from Merle himself here.

Merle Haggard is seventy eight and still touring. He’s one of the hardest working icons in country music and his music truly gave a voice to a generation.

After a run in with lung cancer in 2008, his doctors and family have given him lots of love and support to heal quickly. Then, in December, Merle came down with pneumonia that had him feeling pretty bad.

Since then, Haggard has been recovering but unfortunately he was forced to cancel two shows due to his ongoing diagnosis. Both Saturday night January 31st at the Inn of the Mountain Gods Resort and Casino in Mescalero, and Sunday night February 1st at the Farmington Civic Center Ballroom, had to be canceled.

Merle went into depth about his current condition on Willie’s Roadhouse on Sirius XM which shines a light on Merle’s gratitude for everyone in his life. Listen to the audio below.

Merle’s son, Ben Haggard took to twitter to clear up some of the air around his father’s condition.

Clear up something. Dad isn’t sick again, he’s just still recovering from pneumonia. Takes awhile to get back to normal! 👍🏻😀

Obviously lets all keep Merle Haggard in our thoughts and wish him a speedy recovery. In honor of his Bakersfield sound, watch the video below before you go!