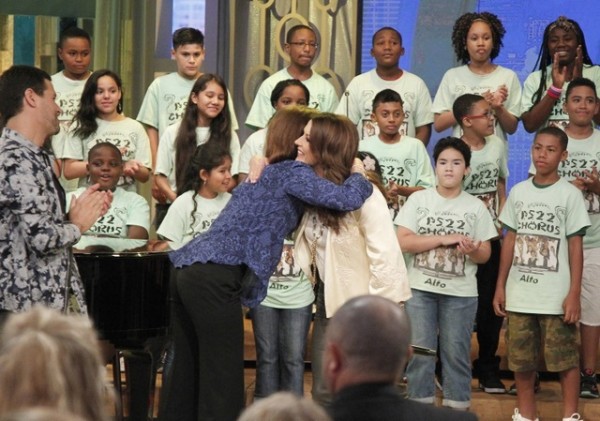 The PS22 choir from Staten Island got a big surprise when they appeared on ABC’s The View, country singer Martina McBride!

McBride made a surprise appearance, much to the delight of the audience and the choir students, to sing her hit “I’m Gonna Love You Through It”.

McBride says she was moved by the video and the rendition of her song and wanted to join the choir during their visit to network television.

“I was extremely touched when I saw the video of the students performing ‘I’m Gonna Love You Through It,’” said Martina. “Their talent amazes me and I jumped at the chance to sing with them. This is such a song of hope and reflection of strength and I’m so proud of the long journey these lyrics have taken on.”

McBride has always been very passionate about charitable causes. Through her work with “Team Martina”, her philanthropic initiative, fans are invited to join her by volunteering at non-profits on select tour stops and individually in their hometowns. As of 2015, Martina and her fans have raised over $50,000 to establish the Martina McBride Music Education Program to provide a therapeutic music program for needy children at Covenant House La Alianza orphanage. She was recently honored with the Covenant House Beacon of Hope Award and Music Business Association’s prestigious 2015 Harry Chapin Memorial Humanitarian Award for her philanthropic efforts on behalf of domestic violence and using her voice throughout her musical career.

Martina is currently on the road for her Everlasting Tour.

Martina McBride Surprises A Student Choir and Their TeacherA group of students who went viral for helping their teacher through her cancer battle performed—and then the teacher received a surprise of a lifetime from Martina McBride!