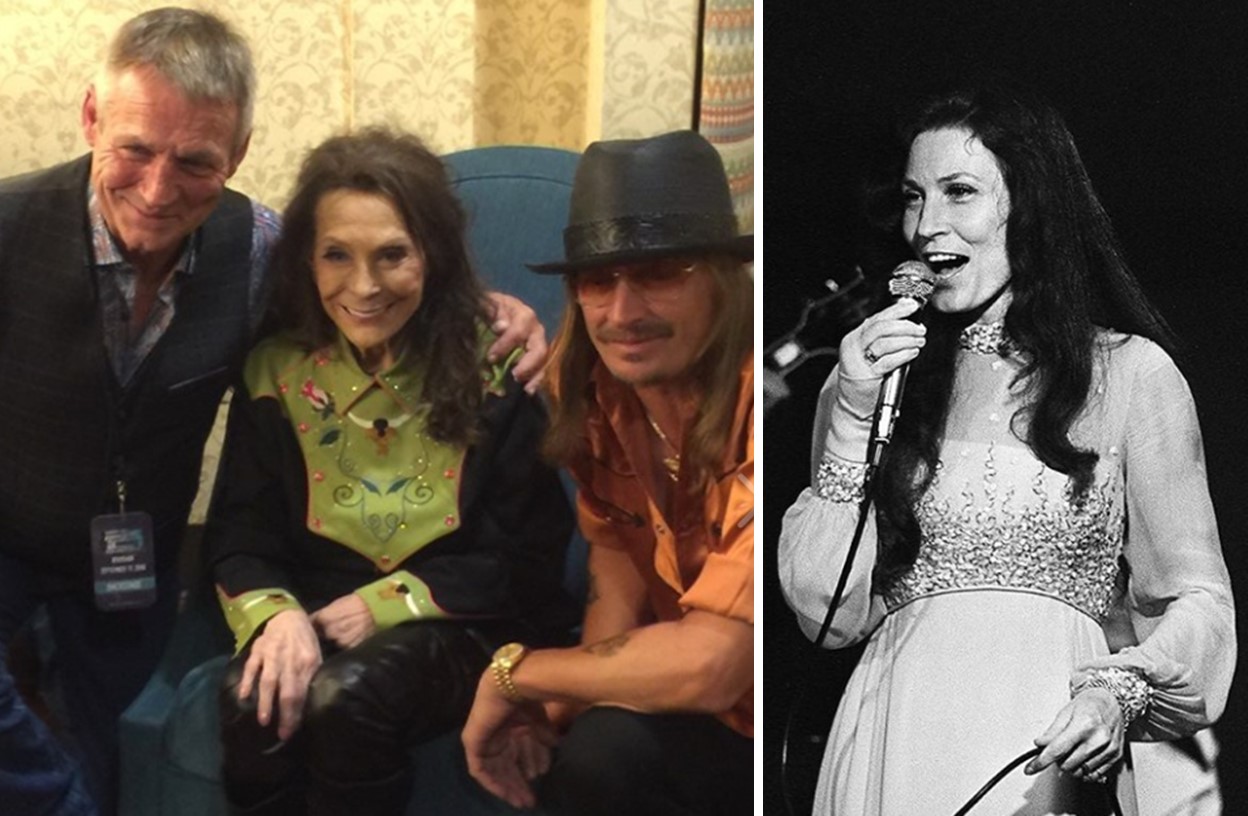 Before lights, camera, action a girl's gotta have hair and makeup! My usual gal couldn't be here tonight so Tim and Patsy are filling in. I'll let you know how they do! I'm about to head to the Nashville Songwriters Award Show @nsaiofficial to receive the Kris Kristofferson Lifetime Achievement Award. It means to world to me. I'd rather write than sing. Songwriting is my heart! Nashville Songwriters Association International #NSAI Kris Kristofferson #showtime #songwriting #coalminersdaughter #lifewithloretta #loveyall #kriskristofferson #getyourglamon

Kid Rock and son Ernest Ray Lynn escorted Loretta to the stage as she accepted the honor.

“Hello everybody, I’m Loretta. I want y’all to know I love you. Thank y’all for coming out,” the singer-songwriter told the crowd after they gave her a standing ovation, according to Billboard. “Thank y’all. I love ya.”

Had a ball getting to honor my hero and buddy @lorettalynnofficial last night with the Kris Kristofferson Lifetime Achievement Award at the #nashvillesongwriterawards! 📸: @jasonkempin / @gettyimages for @nsaiofficial

It’s wonderful to see Loretta out in public and getting the recognition she so deserves! Scroll right for a look at the Nashville Songwriter Awards ceremony!

Last night was unforgettable! Congratulations to all of the winners and a huge thank you to everyone who made the 2nd Annual Nashville Songwriter Awards possible, especially our presenting sponsor City National Bank! Read more through the link in our profile! 📷 Jason Davis • Special thanks to our additional supporting sponsors: @acmawards , @jackdaniels_us , Loeb & Loeb, @wearebroadcasters and Tennessee Association of Broadcasters, @nmpaorg @riaa_awards @soundexchange and @visitmusiccity !

Winners from the 2019 Nashville Songwriter Awards are as follows:

SONG OF THE YEAR
“BREAK UP IN THE END” Written by Chase McGill, Jessie Jo Dillon, Jon Nite

SONGWRITER/ARTIST OF THE YEAR
LUKE COMBS

SONGWRITER OF THE YEAR
JOSH OSBORNE

KRIS KRISTOFFERSON LIFETIME ACHIEVEMENT AWARD
Given in recognition to a songwriter whose works have made a significant contribution to the American songbook and who has inspired the careers of others.
LORETTA LYNN

THE WHITE HAT AWARD
Bestowed by the NSAI Board of Directors to an individual who has significantly served the American songwriting community.
U.S. SENATOR LAMAR ALEXANDER (R-TN)

PRESIDENT’S KEYSTONE AWARD
Given in recognition of significant contributions to the betterment of all songwriters, chosen by the current NSAI President.
GEORGE STRAIT

‘10 SONGS I WISH I’D WRITTEN’ AWARDS
Each year, the highly-coveted ’10 Songs I Wish I’d Written’ Awards are voted on by Professional Songwriter Members of NSAI honoring the work of their songwriter peers. Songs eligible for the award have at least one Nashville-based writer and charted in the Top 20 of Billboard Airplay chart in the Christian, Country, Mainstream Top 40, and/or Rock genres during the eligible period. The NSAI Song Of The Year is the highest vote-getter.

Congrats to all of those honored… especially Loretta Lynn on her Lifetime Achievement Award! Share this news with other country music fans!