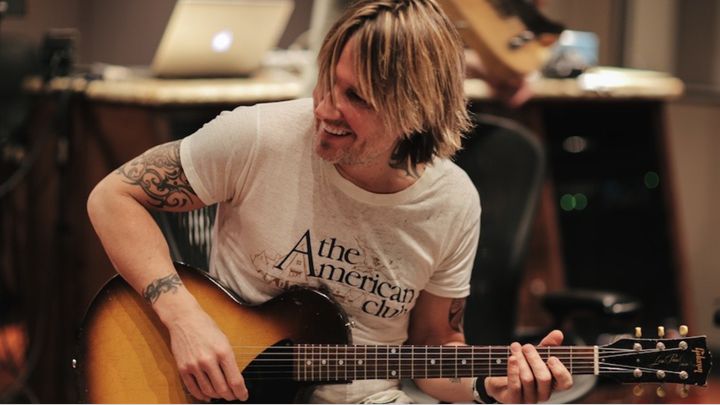 Keith Urban released his ninth studio album TODAY! Ripcord delivers a wide-array of songs that will leave Urban fans spinning. It’s hard to believe that every dynamic song began with just a simple drum machine and a six-string banjo.

“I’ve written mostly with drum machines and ‘ganjos’ over the last 20 years or so,” Urban tells Rolling Stone Country.

“More often than not, once we get into the studio, the poor old drum machine gets pushed to the back and the drummer takes over. And yet so much of the whole origin of the creation is the drum machine and the banjo working together.”

Don’t expect Ripcord to be “super-country”, Urban wanted everything from bluegrass to Cuban-influences on his new project. He decided to team up with the rapper Pitbull to get a beat that only the popular artist and producer could achieve.

“Rhythm is everything, and [Pitbull]’s got the Cuban blood, so his sense of rhythm is super cool,” says Urban.

“I just wanted him on the track. I wanted what he does. It wasn’t about having a rapper on there. . .The thing that separates this record from any others is I never second guessed anything. If an idea hit me, I’d act on it. You can always change it after the fact. But I wasn’t thinking in terms of limitations or parameters. If Pitbull didn’t respond to the track, we would’ve just left it how it was. It wasn’t like I was going to find another rapper.”

Pitbull wasn’t the only artist that Urban collaborated with. Carrie Underwood also joins Urban on the track “The Fighter”.

No matter what, fans are sure to love this new project from their favorite Aussie!

Listen below to the new album Ripcord from Keith Urban!

“Gettin’ In The Way”

“Boy Gets A Truck”

“That Could Be Us”