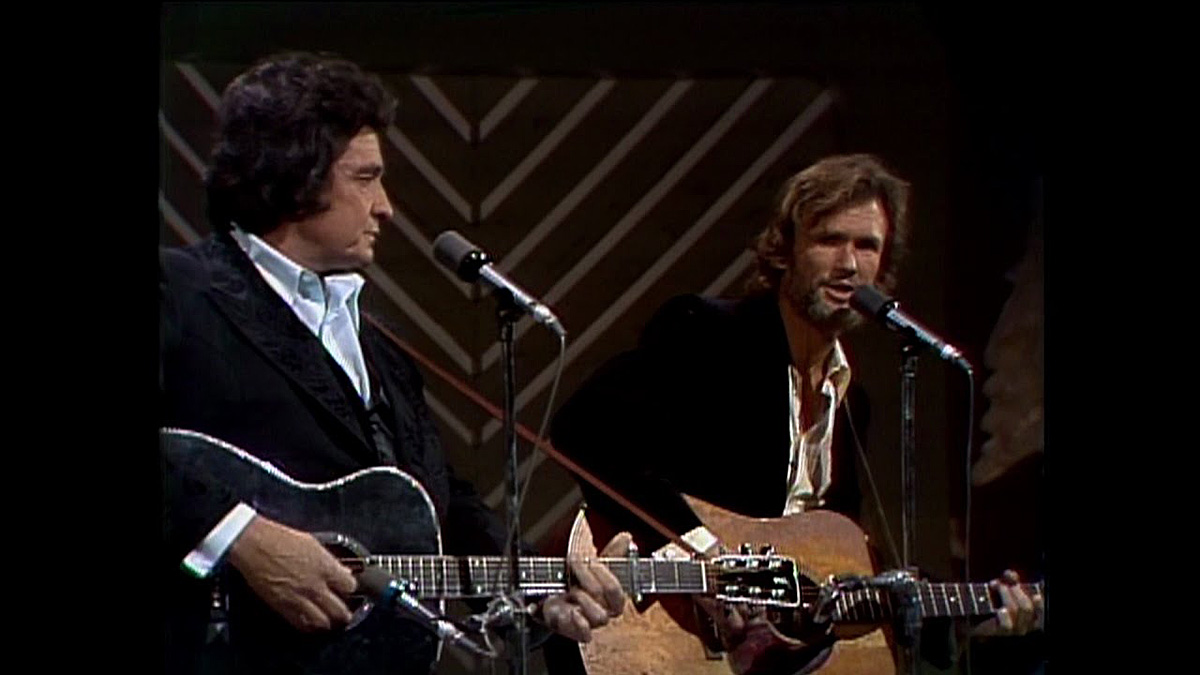 The Johnny Cash Sunday Mornin’ Comin’ Down song came from Johnny’s performance that was taped live at the Ryman Auditorium during a taping of The Johnny Cash Show.   Cash introduced the song with the following monologue:

“You know, not everyone who has been on ‘the bum’ wanted it that way. The Great Depression of the 30s set the feet of thousands of people—farmers, city workers—it set ’em to ridin’ the rails. My Daddy was one of those who hopped a freight train a couple of times to go and look for work. He wasn’t a bum. He was a hobo but he wasn’t a bum. I suppose we’ve all….all of us ‘been at one time or another ‘drifter at heart’, and today like yesterday there’s many that are on that road headin’ out. Not searchin’ maybe for work, as much as for self-fulfillment, or understanding of their life…trying to find a *meaning* for their life. And they’re not hoppin’ freights much anymore. Instead they’re thumbin’ cars and diesel trucks along the highways from Maine to Mexico. And many who have drifted…including myself…have found themselves no closer to peace of mind than a dingy backroom, on some lonely Sunday morning, with it comin’ down all around you.”

With the monologue edited off, the recording appeared on the soundtrack LP The Johnny Cash Show the following year, as well as being issued as a single (Columbia Records 4-45211). Cash’s version won the Country Music Association Award for Song of the Year in 1970 and hit #1 on the country chart starting October 10, 1970..

Watch both the Johnny Cash version and the video below of Kristofferson and Cash performing “Sunday Mornin’ Comin’ Down” on The Johnny Cash Show in 1978 below!

This song was written by Kris Kristofferson.

Well, I woke up Sunday morning
With no way to hold my head that didn’t hurt.
And the beer I had for breakfast wasn’t bad,
So I had one more for dessert.
Then I fumbled in my closet through my clothes
And found my cleanest dirty shirt.
Then I washed my face and combed my hair
And stumbled down the stairs to meet the day.

I’d smoked my mind the night before
With cigarettes and songs I’d been picking.
But I lit my first and watched a small kid
Playing with a can that he was kicking.
Then I walked across the street
And caught the Sunday smell of someone frying chicken.
And Lord, it took me back to something that I’d lost
Somewhere, somehow along the way.

On a Sunday morning sidewalk,
I’m wishing, Lord, that I was stoned.
‘Cause there’s something in a Sunday
That makes a body feel alone.
And there’s nothing short a’ dying
That’s half as lonesome as the sound
Of the sleeping city sidewalk
And Sunday morning coming down.

In the park I saw a daddy
With a laughing little girl that he was swinging.
And I stopped beside a Sunday school
And listened to the songs they were singing.
Then I headed down the street,
And somewhere far away a lonely bell was ringing,
And it echoed through the canyon
Like the disappearing dreams of yesterday.

On a Sunday morning sidewalk,
I’m wishing, Lord, that I was stoned.
‘Cause there’s something in a Sunday
That makes a body feel alone.
And there’s nothing short a’ dying
That’s half as lonesome as the sound
Of the sleeping city sidewalk
And Sunday morning coming down.

Remember to “share” the Johnny Cash Sunday Mornin’ Comin’ Down song with other Country Music fans.