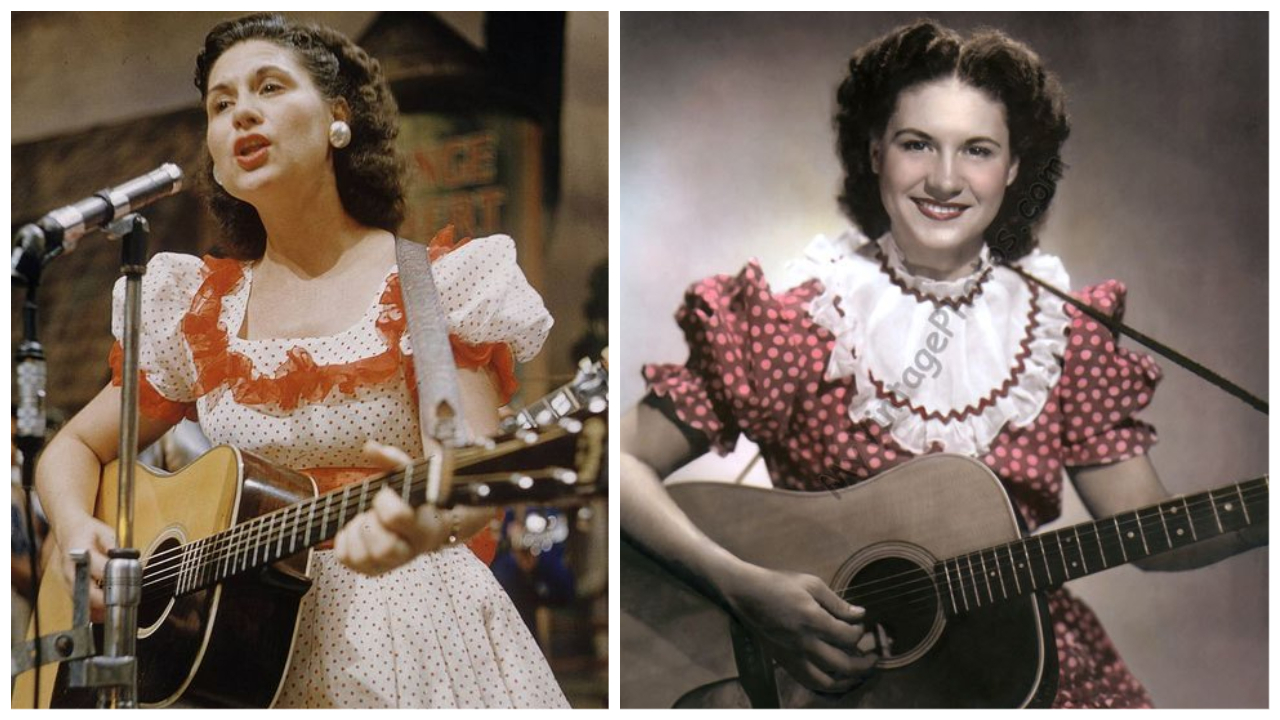 Known as the "Queen of Country," Kitty Wells paved the way for upcoming female artists throughout the 1950s to 1970s.

Kitty Wells was a female pioneer of country music and the first female to reach #1 on the Country Music charts.  A true country star, the “Queen of Country” was born in Nashville. Kitty Wells (born as Muriel Deason), had many hits from the 50s to the 70s. Her name was given to her by her husband Johnnie Wright of Johnnie and Jack during their tour from the old folk ballad, “I’m A-Goin to Marry Kitty Wells.” Her first hit, which debatable was her takeoff point in her career was “It Wasn’t God Who Made Honky Tonk Angels.” Wells recorded a number of answer songs and remakes, but her original piece was still the most listened to version.

She began learning the guitar as child from her father and as a teenager she sang with her sister who performed with the stage name “the Deason Sisters.” The group began to be heard on the radio in the mid 30s, right before she married Johnnie Wright. Wells joined with her husband to sing on tours and his sister, Louise Wright joined later as well. They called themselves Johnnie Wright & The Harmony. Eventually Louise’s husband, Jack Anglin joined the group in 1939 and they renamed the band the Tennessee Hillbillies – which eventually changed again to the Tennessee Mountain Boys.

Anglin was drafted into the Army in 1842 and Wells and Wright performed as a duo; which is when she was given the name Kitty Wells for the stage. Eventually Anglin returned and he and Wright performed as Johnnie & Jack’ Wells toured with them, sometimes performing as back up vocals. In 1947 and 1947, the boys had a regular sot performing at the Grand Ole Opry, and Wells would not usually perform with them. However, she did sing with the duo when they joined the Louisiana Hayride in 1948, which helped them to land a record contract the following year.

That same year, Wells began recording some gospel tracks – with Johnnie & Jack on instrumental backup – but was unsuccessful. Following that, Well was looking toward a retirement for her music career. Then in 1952, Paul Cohen asked her to record “It Wasn’t God Who Made Honky Tonk Angels.” Wells recorded the songs and it became an instant smash hit, reaching No. 1 in the summer for 6 straight weeks. Later in 1952, she joined the Grand Ole Opry.

She followed her number one hit with “Praying for That Back Street Affair,” as a response to Webb Pierce’s “Back Street Affair.” In the rest of the 50s, Wells had multiple hits in the Top Ten. In the early 60s, her career slipped slightly, yet she continued to have multiple Top Ten hits.

A milestone for Wells occurred on October 11, 1976, when she was inducted into the Country Music Hall of Fame. Kitty Wells was definitely an artist upcoming female artists looked up to for inspiration. In 1991, she received the Lifetime Achievement Award from the Grammys. Eventually, in July of 2012, she passed away in her home in Madison, Tennessee from a stroke. She was 92 years old.

Don’t forget to share this article with other fans of Kitty Wells!