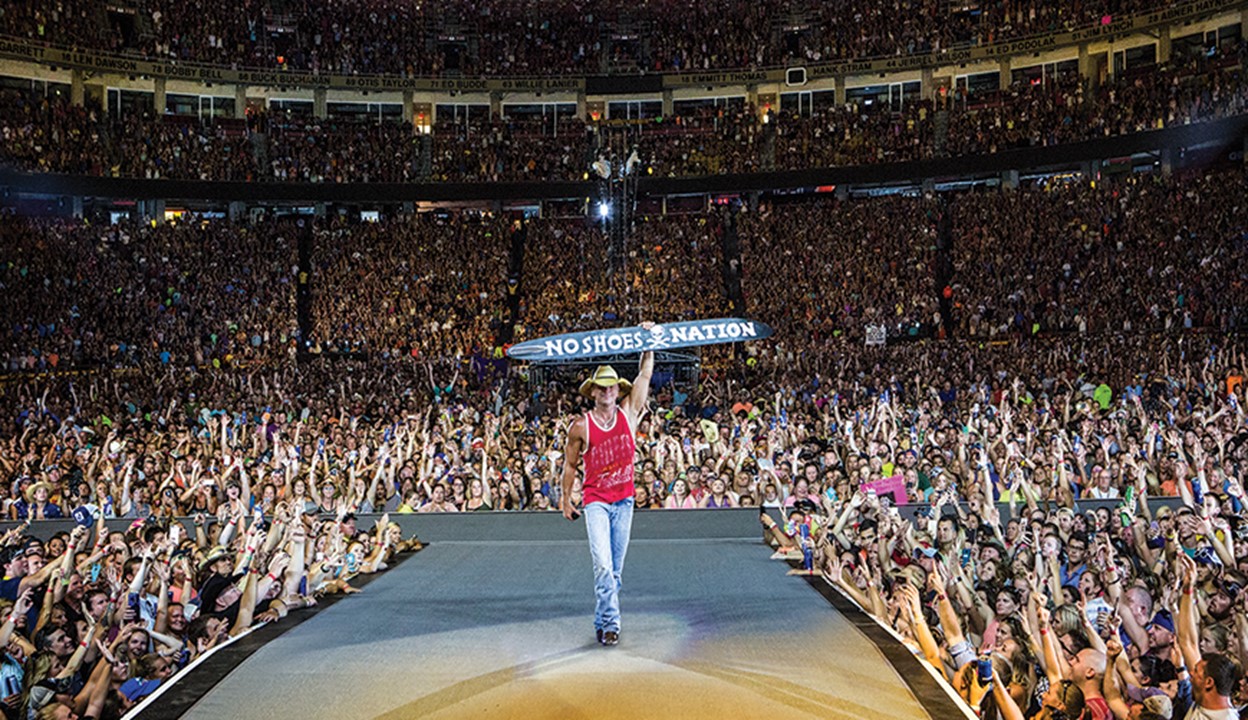 Country artist Kenny Chesney has handpicked an impressive thirty tracks for his forthcoming 'Live In No Shoes Nation: 10 Years of Concert Hits' album!

“No Shoes Nation not only knows no boundaries, we love all kinds of music,” Chesney shared in a statement about the live album. “It’s why Grace Potter is as loved as Eric Church, why David Lee Murphy gets the same response as Zac Brown and his guys. We love life, we love music and we all really love each other!”

“Flora-Bama”
“Summertime”
“Big Star” (with Taylor Swift)
“Boston”
“When I See This Bar” (with Eric Church)
“No Shoes, No Shirt, No Problems”
“Anything but Mine”
“Down the Road” (with Mac McAnally)
“Guitars and Tiki Bars”
“Hemingway’s Whiskey”
“Everybody Wants to Go to Heaven” (with Zac Brown Band)
“I’m Alive”
“Save It for a Rainy Day” (with Old Dominion)
“Pirate Flag”
“Somewhere With You”
“I Go Back”
“One Step Up”
“American Kids”
“You and Tequila” (with Grace Potter)
“Young”
“There Goes My Life”
“Out Last Night”
“Dust on the Bottle” (with David Lee Murphy)
“Coastal”
“The Boys of Fall”
“Noise”
“Old Blue Chair”
“The Joker/Three Little Birds” (with Dave Matthews)
“Happy on the Hey Now”

“So as I was listening to some of these tapes, I decided: they’re as much the people who’ve been coming out to the shows as anybody’s! I shouldn’t be the only one listening – and that sent me down a tube into all these summers out there rocking. When I told the record company how many songs, they thought I’d lost my mind… And that was before we added ‘Young,’ which really started and defined this chapter, to the list,” the Tennessee native explained.

The songs on #LiveinNoShoesNation are just as much the @noshoesnation's as they are anybody's. You're what makes this record and this music so special. You inspired this album. That's the reason this album cover holds so much meaning. October 27 can't come soon enough. Thank you, #noshoesnation.

“I wondered if everyone who’s come out to one of our shows realizes how incredible they sound; if like us, they’re so in the moment, they had no idea. They’re what makes this music special – and this, to me, was a great way to let them know it,” the entertainer mused.