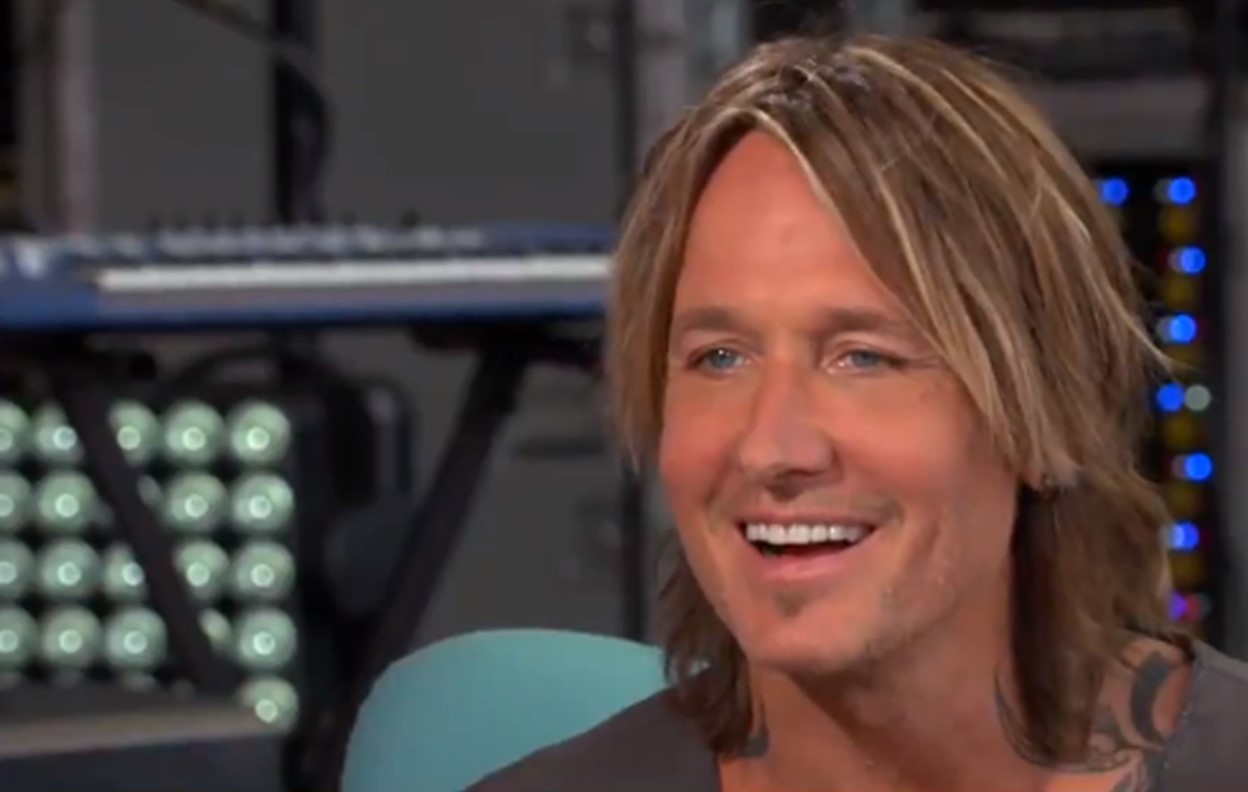 Country music entertainer Keith Urban, 50, isn’t afraid to get candid and really opened up during his chat with Andrew Denton on the Australian program Interview. Urban revealed a lot about his family and even shared how he deals with his emotions in a healthy manner.

So what causes the successful star to tear up and let his feelings take over?

“Oh, anything. [It’s] accumulative, accumulative things that didn’t really warrant a cry at the time, and they add up, you know,” Urban confessed. “I mean, little things, the passing of time, kids growing up, the loss of friends, loved ones for all manner of reasons — all of it.”

.@keithurban once said he likes to have a good cry once a month. So what does a famous, rich music star have to cry about? #InterviewAU pic.twitter.com/fETPC8Nx5R

Besides dropping that interesting tidbit, Urban also talked about his wife of twelve years, Nicole Kidman, and how nervous he was about calling her for the first time. In Keith’s eyes, the actress was way out of his league, but once they stared communicating, he realized they shared a lot in common.

After first getting Nicole's number, it took @keithurban a good while to finally work up the courage to give her a call. #InterviewAU pic.twitter.com/Rf9OGuPKpq

We showed @keithurban a photo from the first night he met his wife Nicole Kidman. Check our that "come hither" cleavage! #InterviewAU pic.twitter.com/SMJWhVfVd5

Of course, the sexy lyrics Urban’s “Gemini” track were brought up since the song directly references Nicole Kidman. So how did the line “you’re a maniac in bed / you’re a brainiac in your head” come about? Here’s the answer…

Some of the lyrics on his new album reference wife Nicole Kidman, such as "you're a maniac in bed / you're a brainiac in your head". How'd that one go down with Nic @keithurban? #InterviewAU pic.twitter.com/fHIDX19aF1

As fans know so well, Keith’s relationship with Nicole led him to seek out help for his addiction issues and helped him get into a much healthier place. The couple have two daughters together, 10-year-old Sunday Rose and 7-year-old Faith Margaret. As can be expected, the tight-knit family has a favorite sing-along song— but it has nothing to do with country music. Watch Keith give us a little taste of the tune…

Despite having a rich back catalogue of his own music, @keithurban finds his kids only ever wanting to sing one song from popular cartoon Shaun The Sheep. (Yes he gives us a rendition). #InterviewAU pic.twitter.com/aoIpQMICfs

When it comes to fan encounters, Keith makes sure that he is in 100% ‘dad mode’ when he’s with his daughters. That means turning down fan requests in order to ensure their safety and privacy.

Even though they have two extremely famous parents, @keithurban makes sure to always put his two young daughters first. #InterviewAU pic.twitter.com/tveyEEPh3A

Keith says that Sunday looks more like him and that Faith resembles Nicole. Their mannerisms are a blend of both parents and so are their interests. Keith also wonders if his daughters have a mixed relationship with music since it’s what takes him away on the road.

"I wonder if they have a strange relationship with music because it’s what takes Daddy away." – @keithurban on how his daughters see the world of music. #InterviewAU pic.twitter.com/QmsgajP5Rk

Besides digging deep into his private life, Keith also shared which country icon made a strong impression on him when he was just 5-years-old and attending his first concert.

.@keithurban recalls his first ever concert experience, watching Johnny Cash at age 5, and the lasting effect it had on him. #InterviewAU pic.twitter.com/d2nvpLDDfd

He also defended his hairstyles over the years…

BONUS: In this unaired segment of #InterviewAU, Andrew finally hits @KeithUrban with the hardest question of all: why the same haircut for so many years? 💇‍♀️💇‍♀️💇‍♀️
–
Watch the full episode here: https://t.co/gqdOhQj48p pic.twitter.com/qSeIfmJ4pL

During his career, Keith has seen a lot of really funny fan signs from the stage. This one remains his favorite…

What a great interview! It really gives you a better look at Keith as a person and makes you appreciate him so much more.