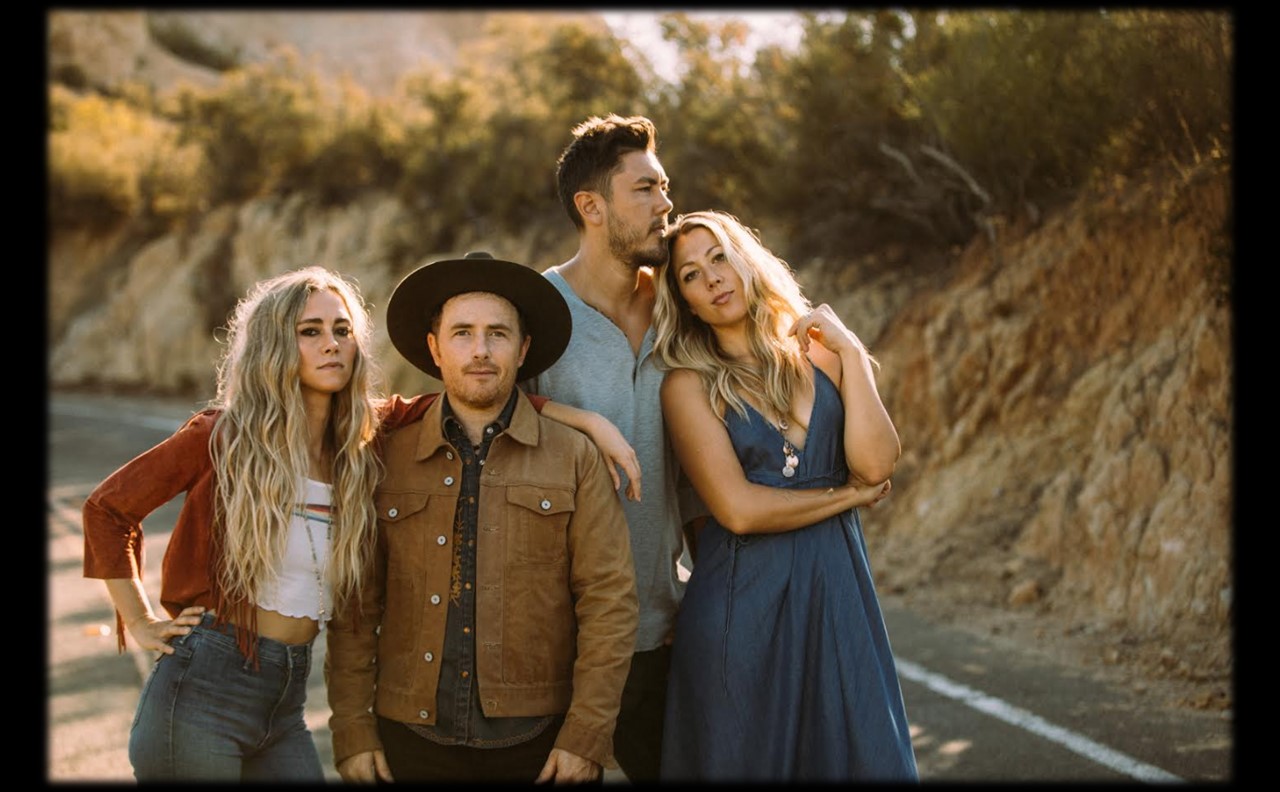 In celebration of Gone West’s album release on June 12th, Country Fancast caught up with the group! Enjoy the insightful interview below.

Country Fancast: “First of all, can you tell our readers how you all met?”

Gone West: “We all met in stages starting about 15 years ago. Jason came to California from Iowa to record music and the producer introduced him to Colbie. They started writing and recording the songs that turned into Colbie’s first album and Jason stayed in Cali with Colbie’s family. A year later they met Justin in LA and Colbie asked him to join her band. They toured the world for years and became best friends. During that time Jason went to Nashville on a songwriting trip and Nelly was his first session. They became really good friends and collaborators for years before getting married. After doing a tour together for Colbie’s album The Malibu Sessions we all decided to try making music as a band, and here we are now!”

Country Fancast: “For those that may not know you yet, how do you describe the Gone West sound?”

Gone West: “Our sound is a wave of 4 part harmony that combines the coast of California and the hills of Tennessee. Organic instrumentation and sparse production leave space for the vocals and lyrics to lead the way. Our songs are all inspired by real life and every line means something to us personally.”

Country Fancast: “You just announced your debut album Canyons, what are you looking forward to most about releasing this record?”

Gone West: “We can’t wait for people to hear all new songs on this album. There are so many different sonic vibes and we hope the listeners enjoy the adventure we tried to create. There are more heartbreak songs and love songs and even a reggae-country groover. And the first song we wrote as Gone West is also on it. The most exciting thing to us is that 7 of the 13 songs still haven’t even been heard.”

Country Fancast: “‘Slow Down’ is the newest track from the record – where did the inspiration come from for this one?”

Gone West: “‘Slow Down’ was the last song we wrote for this album. We thought we were done writing but we went in one more time with Jamie Kenney and this idea came about. We wanted to write a love song that also encourages people to take a break from this fast-paced world and just be together. We’re all surrounded by so much life it felt like this song could be a temporary escape. It also took the longest to write, which makes the title even more fitting.”

Country Fancast:  “Do you have a favorite song on the record that fans may not have heard yet?”

Gone West: “One of our favorite songs is called ‘When To Say Goodbye.’ It’s inspired by one of our close friends going through a hard time in their relationship and it talks about when you finally have to let go of something broken. It was the first song we wrote as this band and it really started this whole album into motion. We wrote it with Jimmy Robbins and we’re really excited about how the recording turned out.”

Gone West: “Yes we’ve re-scheduled our shows for summer and the fall, hoping all goes as planned. Our shows are super fun! Having the 4 of us all take turns singing lead on different songs plus harmonizing on the choruses makes it fun for us on stage, plus gives the audience such a unique experience. We play most of the songs on our new album Canyons, plus all the songs off our EP Tides, a cover song we all grew up listening to, plus we strip down a section of the show to an acoustic set of songs from our individual solo careers before we formed Gone West.”

Country Fancast: “How are you all keeping busy during this time?”

Gone West: “We are making the most of getting to be home with our dogs and loved ones. Reading, making music, FaceTiming with friends and family, playing games, watching movies, cooking, exercising, taking walks outside and making plans for the future.”

Country Fancast: “What does your ideal downtime look like?”

Gone West: “Our ideal downtime sounds exactly just like the above, with the exception of getting to do those things in person with more people that we love.”

Country Fancast: “What do you hope fans and new listeners will take away from the new record?”

Gone West: “We hope everyone that hears our music truly enjoys it and wants to play it in their cars, with their friends, making dinner, at the beach, dancing, falling in love, or navigating through sadness. Music connects us and helps us feel like we’re all alike and in this together.”

Country Fancast: “Lastly – you’ve already made your Grand Ole Opry debut and played shows with George Strait among many other impressive accolades. What are some further aspirations you have as a band?”

Gone West: “We collectively hope to do a song with Coldplay someday. We love them so much, Chris Martin is a musical genius. That would be surreal if we got the chance.”

We want to hang with you! Our Grand Canyon pre-order bundle includes not only an autographed vinyl/CD and t-shirt, but a digital hang with us! Seriously, we will call and chat with you!! Check it out by following the link in our bio ✨

Be sure to share Gone West’s refreshing music with other country music fans!