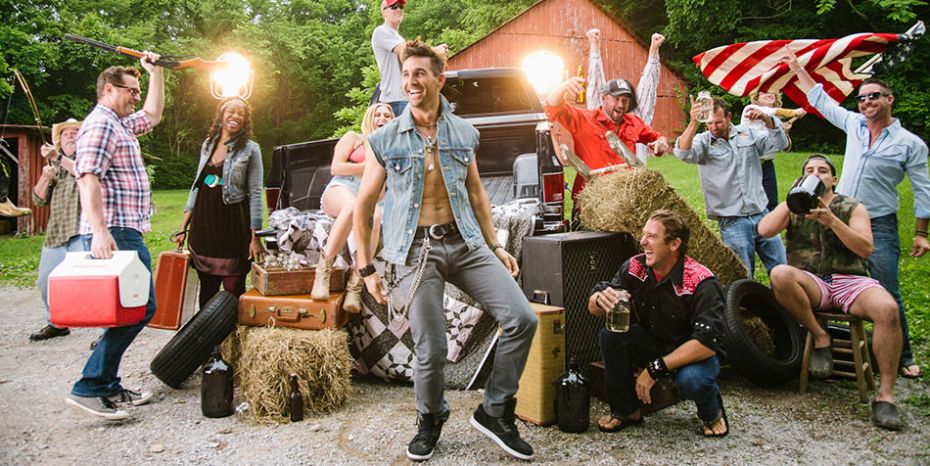 Country Fancast has behind the scenes video of Jake Owen during his hilarious and fun photo shoot for his single "Real Life".

Jake Owen‘s video for his single “Real Life” has been a huge success with fans. With almost 800,000 views on YouTube in just 3 weeks, it’s easy to say most folks have already witnessed Owen’s smooth dance moves and epic costume changes. The singing squirrel alone should probably have its own record deal.

Since the shooting style included that “behind-the-scenes” feel, it’s easy to get confused as to what’s “real life” and what’s scripted.

CMT caught up with the crew from the shoot and discovered some interesting facts about the production.

First and foremost, Owen’s incredible dancing skills! In the video you see Owen do a karate-type kick on the bed of a pickup truck. This impromptu move completely surprised director Jeff Venable and he absolutely knew he had to include it in the final cut of the video.

“He did that kick during rehearsal, and I told him, ‘Oh, my God. Please, please do that in the real one,’” Venable said. “That scene was supposed to be just a pile of every country music video stereotype in one shot. And Jake pulled out the crane kick right in the back of the truck. That was so great.”

Most of the video was shot at Finch’s Country Store in Pegram, Tennessee, while other scenes were shot at a nearby Waffle House restaurant.

This was Venable’s first music video for Owen and he would absolutely work with the country singer again.

“You can tell when an artist has a stake in the video and wants it to be the best it can be,” he said. “Jake was so collaborative — all day long. He trusted me. And he was so kind and there was no ego to him at all.”

Watch the behind-the-scenes footage below followed by the music video for “Real Life”!