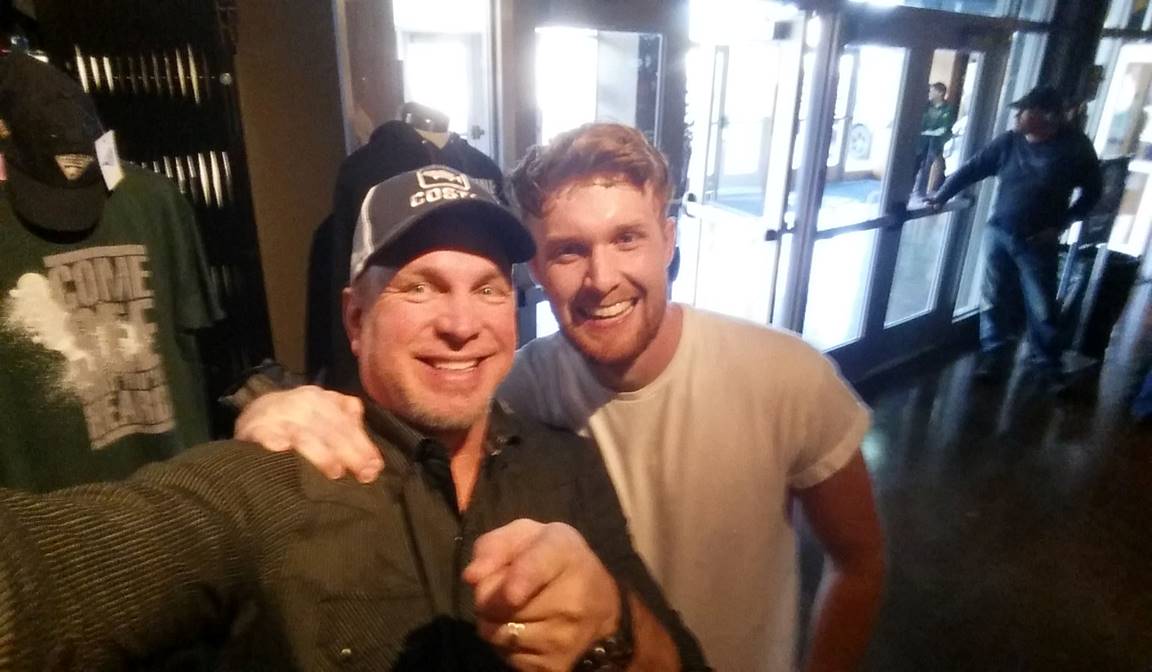 Irish singer-songwriter Diarmaid McGee is having the best week EVER in Music City. Learn more about this newly discovered talent and listen to more of his music here!

Diarmaid McGee stole our attention yesterday when he covered Eric Church’s hit song “Wrecking Ball” on The Bobby Bones Show. Needless to say, the 23-year-old Irish singer-songwriter has caused quite a stir in Nashville and beyond. Country Fancast reached out to the young entertainer and he was kind enough to answer some of our most burning questions! Enjoy his full interview and live music below.

Country Fancast: “First things first— How do you pronounce your first name?”

Diarmaid McGee: “My name is unusual, I know! It is Irish. Now what it means… eh, I don’t know. My Grandfather’s name is John, so here in America I go by that a lot. God help the poor folks at Starbucks, I changed it to make their life a little easier too!”

CF: “What brought you all the way from Donegal, Ireland to Nashville, Tennessee?”

DM: “I lived in New York for 6 months, when my visa was coming to a close I decided to fly home via Nashville and, with that, I was hooked. I had to come back. So, since then—18 months ago— I have been saving for this trip with my Aunt, who has always wanted to visit. I am obsessed with songwriting, which makes the attraction here all that much more magical. This place really is something. I have been blessed to be honest. Every time I am here in the States I am always surrounded by the most amazing people. You are all incredible here.”

CF: “Your stars certainly aligned on this trip! First you run into Garth Brooks while checking out the The Musicians Hall Of Fame, then you encounter Morgan from the Bobby Bones Show at a UPS Store. What was meeting your musical idol like?”

DM: “You know, I have rehearsed this moment since I first watched the VHS tape of his live show in Dublin, Ireland that my parents bought me when I was five-years-old. I was going to be so cool and collected when I got my chance. And this week, well I cried. Real tears,” laughs McGee.

“This is my second time to meet him. I got a chance to speak with him back home on January 20, 2014 when he was over for a press conference. I heard he was on Irish turf, so I left school bag and baggage and headed to the where I thought he was and low-and-behold there he stood. Garth is special. He is a true example of a living legend and at the same time he is the most humble man you will find. He has this way of making everyone he speaks to feel like they are the only person on Earth for those moments they have with him and to me, that in and of itself is enough to allow him the idol status he so rightly deserves.”

CF: “Did Morgan immediately invite you onto the popular radio show or did you have to convince her?”

DM: “You know, I asked her and she was smiling at me. So I asked again and she did agree in a way, saying to send her an email— so she gave me her details. I did it right then and there and that night she said she didn’t think that the scheduling of the show would work. Then around half an hour later she replied again saying, ‘If you can make 8AM in the studio, you can sit in and listen to a few segments, no problem.’ Morgan is a total lady. And the rest of the crew and Bobby are just the most amazing people— so much fun and beautiful madness goes on in that room.”

CF: “How is your life different since covering Eric Church’s “Wrecking Ball” on the Bobby Bones Show yesterday morning?”

DM: “Life is Beautiful. Amazing. A Dream. I have received messages from so many wonderful people saying the most kind and caring things. I know I said it earlier, but the people here just kill me. They are absolutely Wonderful! Hearing these things is the very thing I have been dreaming about since I was a little boy. Knowing that My Singing has Made people feel this way is just mind-blowing. I have cried more times this past week than in my entire 23 years to date.”

CF:  “Since grabbing the attention of American country music fans, do you plan on sticking around Nashville?”

DM: “This is an easy question! If these folks will have me, then I will stay. I will organize adoption papers with my family back home and see if anyone needs somebody in their house to make lots of noise writing and practicing everyday,” jokes McGee. “I told my family and friends last night on the phone that this place has something, that intangible thing that makes a place really special. Maybe it is in the water…?”

CF: “What do your family and friends back home think of all the fuss surrounding you now?”

DM: “They too have cried a lot this week! Irish people must cry a lot— They have been so happy to see it. You know, they have been the biggest part of my journey. I told them all at 16, going on 17-years-old, I was going to be a musician and never once have I heard anything negative come from one of them about it. Now, that is not to say that they have not been scared or worried about where I was headed at times, but nonetheless, they have always been more supportive and have believed in me much more than I even did in myself.”

CF: “Do you think your Irish background gives you a unique perspective when it comes to performing country tunes?”

DM: “Country music is big in Ireland. We have ‘American Country’ and ‘Irish Country.’ They have some similar veins, but are quite different too— if that makes any sense. I grew up in the middle of the countryside, by the sea. I am a Rural Boy! I am not sure if ‘unique’ is the right word for me to say, but I think coming from the Irish culture definitely means I have a different angle on it. Whether or not ‘different’ is good, I guess I am about to find out!”

CF: “Based on your YouTube channel, you are clearly a very versatile artist who samples from multiple musical genres. Do you also dabble in songwriting?”

DM: “I came to Nashville way back 18 months ago because of all the legendary tales and fables I had heard surrounding the now iconic writers. That fact that Kris Kristofferson walked these streets gives me chills. I love him— he is a pure idol to me. His writing has a tone and sensibility that I have never heard anyone else put out to date. He really is a special man. I am obsessed with the craft of songwriting, as I said. It just captivates me. I write everyday. Just things I hear and see and do seem to end up as songs. I hear a lot of people say that songwriting is a kind of self-therapy and that definition works just fine for me! Writing for myself and others has been the dream from day one. To know that a song you write could potentially effect millions— even Billions of people— is motivation enough for me. I am reminded of Tony Arata writing The Dance that Garth recorded when I say this.”

CF: “We have to ask, where can your new fans catch you performing live in the near future?”

DM: “I have played live shows in Ireland from being that 16-year-old boy I spoke about to now, being this 23-year-old boy. My Facebook is under my name, “Diarmaid McGee,” please add me on there— I would be delighted to chat with everyone. My website is diarmaidmcgee.com, so please call in there too. Twitter and Instagram are all en route— my cousin and best friend are geniuses in these areas, so they are getting them going as we speak! Hopefully, with a bit of luck and the grace of God, I will be able to go out to see all of the amazing people who have reached out to me in this part of the world and all over and play for them in their own hometowns. Even saying that gives me the chills. It feels like an insane thing to say but I feel like that is every guitar-wielding dreamer’s dream. ‘The Dream’ is an addiction within itself, both the illness and the cure. But I guess that is just music and it always will be. God Bless Music.”

Amen. It’s fantastic to stumble across an enthusiastic artist with so much insight and personal drive. Country Fancast wishes him the best of luck as he chases his dreams in Nashville. View the performance that put Diarmaid on everyone’s radar below!