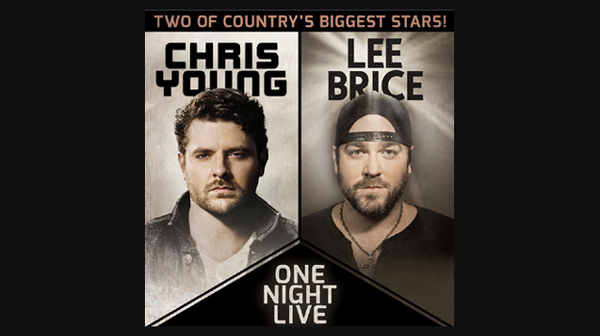 Chris Young and Lee Brice are on tour together and the fans couldn’t be happier! Read the full update here.

Chris Young and Lee Brice are on tour together and the fans couldn’t be happier! The co-headlining tour kicked off recently in Syracuse to rave reviews and a sold out crowd.

Chris has been working hard lately headlining a tour up the East coast, playing on the Late Show, releasing music videos (Lonely), and giving to charity (Nashville School of the Arts). He enjoys touring with his buddy Lee Brice and says “Lee and I had a blast last year when we were out with Brad (Paisley) and so we thought it would be great to join up for a co-headlining tour for our fans this winter,”

Lee has been hard at work as well recently performing on the Today show, releasing music videos (Drinking Class), and being nominated for CMA Awards (“I Don’t Dance,” Song of the year). He’s pumped about the new tour with Chris and says “Chris and I have been talking about touring together again for a while. We have a lot of fun together!”

The two have seven more shows together before the tour comes to a close in Hawaii on March 8th. Tour dates and other info is listed on their websites HERE (Chris) and HERE (Lee). And be sure to follow their tour stories on social media!

Hopefully Lee and Chris will write some new songs together while palling around out on the road.