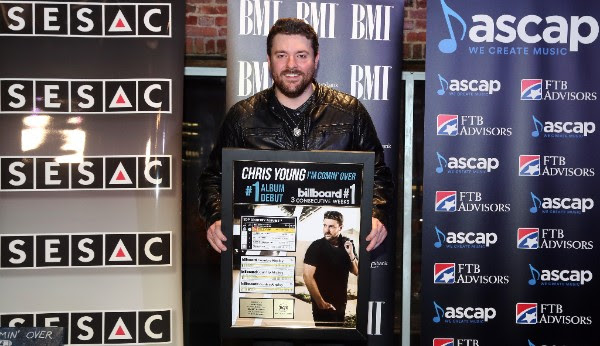 In a special celebration in Nashville this past Monday (Jan. 11) night, Chris Young and fellow songwriters were honored for the album and song 'I'm Comin' Over'.

Chris Young brought in the new year with a number one album, I’m Comin’ Over, on the Billboard Top Country Airplay chart. The album’s title track made Young one of only two country artists to achieve a three-week chart-topper in 2015. Young and his “I’m Comin’ Over” co-writers Corey Crowder and Josh Hoge were surprised with the news of RIAA Platinum certification for the song.

“I’m very proud to have made this song with Corey and Josh,” said Young. “This is my seventh No. 1 [single], and seven is my lucky number ever since I was a little kid. I truly am lucky and very blessed.”

Fans don’t have to wait very long for what’s next for Young. The follow up single to “I’m Comin’ Over” will be a duet with The Voice winner Cassadee Pope titled “Think Of You.” Pope will also join as special guest on Young’s 2016 tour, starting January 21 in Lowell, MA.

“I love having Cassadee Pope on this song. I think she is a phenomenal singer and is the exact, perfect way to complete that song the way I wanted. It’s one of my favorite tracks on the record.” Young stated on his website.

“I was playing an acoustic show with Cassadee, and she started her first song, and the minute she opened her mouth, it clicked. We were right in the beginning stages of ‘who do we get to do this?’ and I said, ‘I’m asking her right when I get off this stage.’ She’s awesome, and I’m so glad she said ‘yes’ because she was my first choice, and I think people are going to be really into this song.” Young continued on how the duet came to be.

Watch the lyric video for Chris Young‘s next single “Think of You” below!