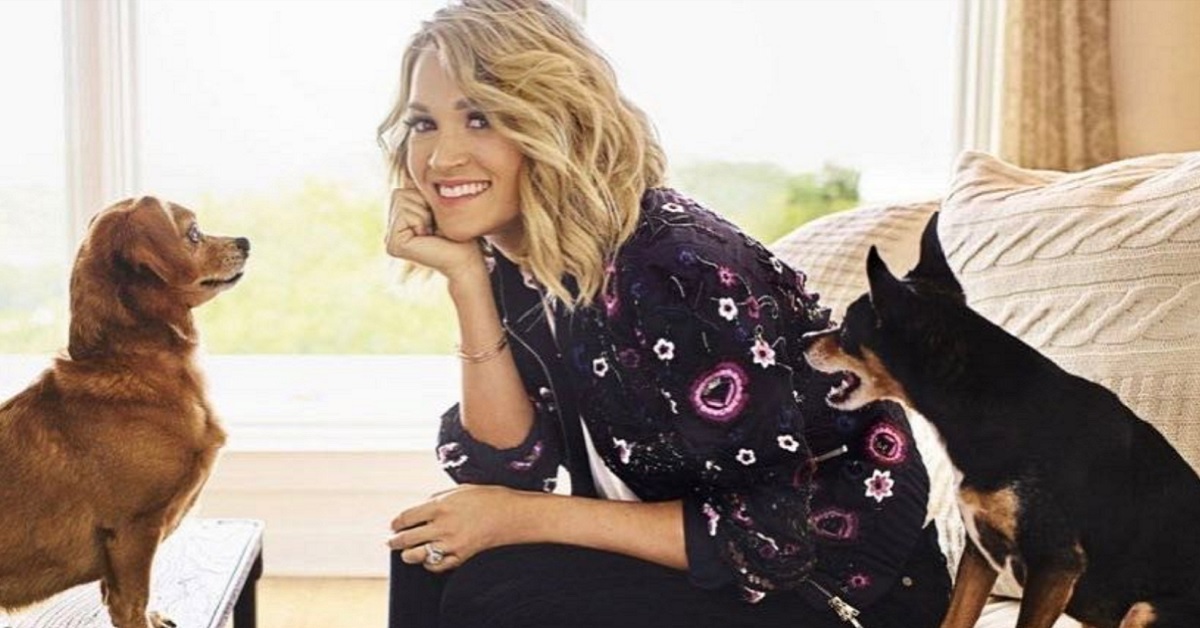 Carrie Underwood’s Dogs are adorable!   Carrie is a big fan of adopting rescue dogs and providing a good forever home to dogs in need.  Both of her pups Penny and Ace were rescue dogs.  The cute pups go on tour and get a fair amount of their own social media attention.  Ace and Penny have played prominent roles in Carrie’s life.  Ace even enjoyed being the official ring bearer at Carrie’s wedding to Mike Fisher.

In honor of "Labor" Day, Ace & Penny would like to make an announcement. Their parents couldn't be happier…

Enjoy the highlights of Penny and Ace below.

Penny Jean is a Dachshund mix and displays an amusing range of facial expressions.

Penny and I are on the same page. #DadJokes 😂

Penny Shows How To Snore

My Friday night…not sure why I find this so funny. 🤷‍♀️

Ace Demonstrates How to Dream and Snore

Ace is a power napper and appears to be a Rat Terrier and Chihuahua mix.

Ace demonstrates how to sleep in style

Both pups show how to celebrate National Dog day…

In honor of #NationalDogDay here are my little fur bundles of joy, Ace and Penny…they are naughty and crazy and noisy, but I love 'em! #AdoptDontShop #rescuedog

Both dogs are recognized on “Love Your Pet Day”…

Today is #NationalLoveYourPetDay !!! And my sweet Ace and Penny Jean are pretty hard NOT to love! #rescuedogs #adopt #SpayAndNeuter

Got up from the breakfast table to change a diaper and this is what happens! Naughty Penny!

Isiah does not seem to mind and has become best buds with Penny.

Good girl…Pa-ba (this is how he says "Penny"). I half expected these two to clash, but with lots of carefully watched playtime and working hard to teach both how to treat each other, we've managed to do alright! I even think they might ❤️ each other! #babies #furbabies #kidsanddogs #friends

Penny Jean is a major foodie….at least she gets major exercise doing this….

Breakfast with Penny. She does this every morning!

Carrie clearly loves her pups!  The Oklahoma singer completed special water-based physical therapy for Ace when he suffered paralysis after a herniated disk.

Ace update: His physical therapy is really helping…he gets a little better every day! I even have to stop him from trying to play with his sister…he'll be back in action in no time! Thanks for all the concern and well wishes! ❤️

Penny even helps serve as a fashion model for Carrie’s clothing line.

She likes to call this her CALIA by Penny look! @CALIAbyCarrie

Of course, fellow Country singer Miranda Lambert is a major dog fan and appears to know how to help spoil Carrie’s pups.

Ace and Penny want to thank @mirandalambert for sending them lots of goodies!!! Super sweet and super cute! Thanks so much, girl!!! ❤️ ya! #muttnation #muttnationfoundation #rescuedogs

Both dogs show how to strike a pose for “National Dog Day”.

Penny is a  major “Ham” for the camera.

Don't let this face fool you…she is bad to the bone! #rescuedog #naughtydog

At times, it is a little difficult to get some privacy.

Can't a mom just go to the bathroom in peace?

Showing some love and cuddle time with Penny Jean . . .

Penny Jean makes a great official greeter when coming off stage on tour.

I come off stage and onto the bus and this face awaits me…and I melt. #rescuedog #adopt

Ace helps out with a photo shoot…

#FBF to the @ALMAY shoot with one of my favorite co-stars, Ace!

Penny knows how to rock Halloween.

Cloudy but no rain = perfect day to run outside! 1mi treadmill warm up, tabata arms and abs, finish up with a 3 mile run/lunge up the hills. I'm a sweaty mess, but fortunately I have sweet Penny to help get me cleaned up! Ew. #StayThePath #CALIAbyCarrie #NoMakeup #NoFilter #BeNice

Ace likes to play and pretend that he is boss…

Carrie shows what dog heaven is all about…

Got to spend a little time at home this weekend. I was in dog heaven! #ShelterDogs #Adopt

Penny Jean knows what “lazy day” is all about.

What a wonderfully lazy day…

Carrie likes to volunteer at shelters and it is a wonder that she does not have an entire pack of dogs . . .

Among her other talents, she's also a personal bather…and she'll work around your schedule.

Cuddles on the couch…

Ace is not a fan of thunder…

When it thunders outside, my little one hides under the bed. Awww…

March 15th is the official birthday celebration day for both pups…

This waits for me at home! My little furry loves! I wasn't there for their birthday yesterday! Dunno when their real birthday is, but they were both born in the spring…so I assigned it March 15! Happy birthday kids!