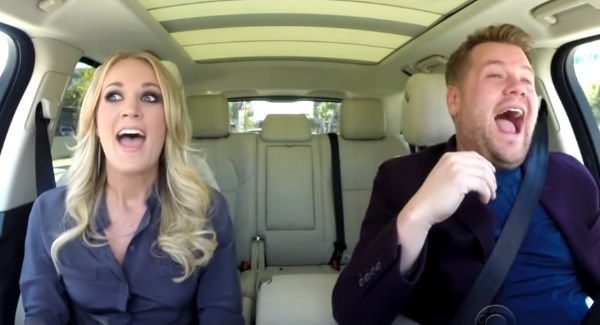 In a rare moment of candidness, “Smoke Break” singer Carrie Underwood rode through the streets of Los Angeles with James Corden, the host of late-night television talk show The Late Late Show with James Corden on CBS. Corden’s British accent makes the segment all the funnier as Underwood attempts to explain country music and her husband’s hockey career with the hilarious host. We even hear Underwood confirm that her husband Mike Fisher’s last hockey fight, where Fisher reportedly knocked a guy’s tooth out, was “hot”.

Since the segment is called “Carpool Karaoke”, Underwood and Corden are seen singing some of Underwood’s famous hits during the unusual interview session. Underwood harmonizes with herself through the car stereo while Corden sings passionately to “Jesus Take the Wheel”, at one point making Underwood a bit nervous as he literally lets go of the steering wheel as a joke.

Corden asks Underwood if he would need cowboy boots to be a country star. Underwood is adamant that he would, saying that “boots are the roots”, which leads to the duo stopping at a local boot shop to try some of the iconic footwear on. Corden tried on a $2000 vest with his elaborate boots and a black cowboy hat, leaving only with the cowboy hat because he was on a budget.

Back in the car, Underwood got to choose her own karaoke song aside from her own hits, which was Wham!’s “Wake Me Up (Before You Go-Go)”. She surprised Corden and her fans by knowing every single word.

When Underwood isn’t riding around singing Karaoke with British men, she is releasing amazing music videos for songs off her current album Storyteller. Recently she released a beautiful clip for the sweet song “Heartbeat”.