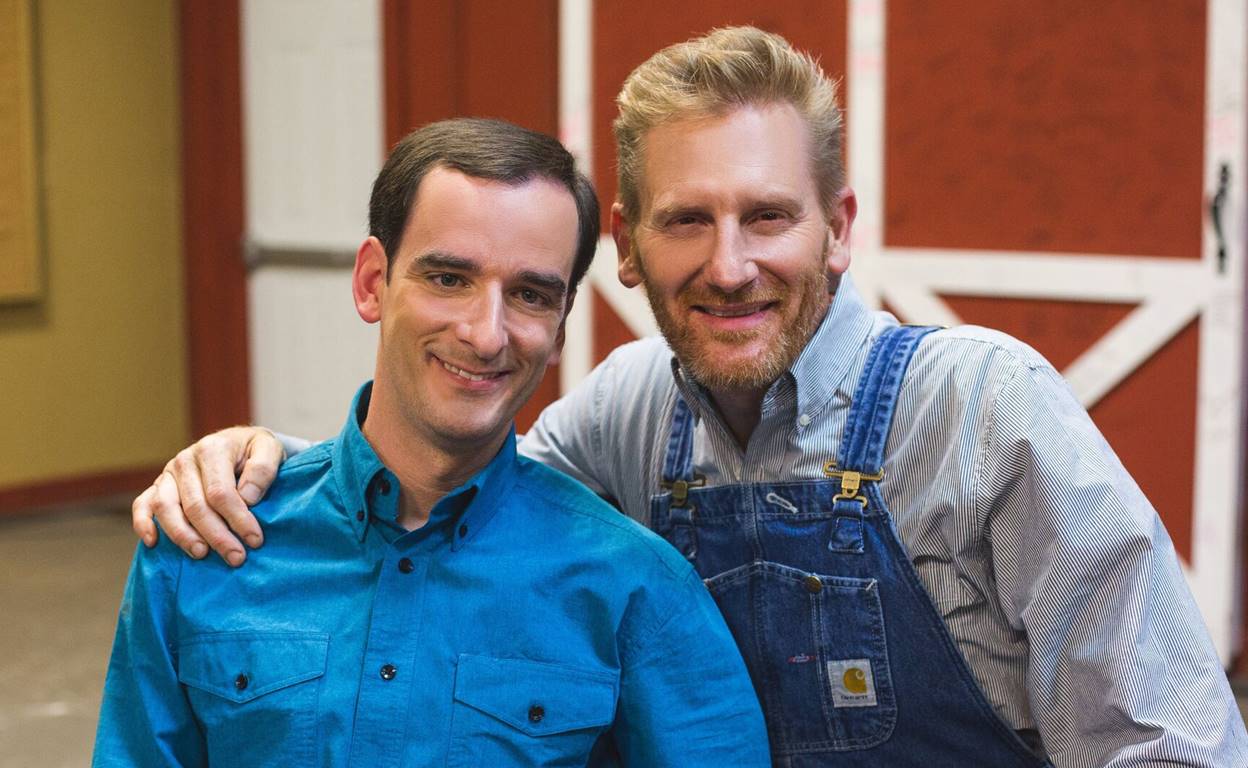 A few months back, Joey + Rory fans became familiar with the amazing story of Bradley Walker. The Alabama native and close friend of the Feek family was selected by Joey herself to sing the touching hymn “Leave It There” at her graveside service. That powerful moment became a turning point in Bradley’s life.

Within the close-knit crowd of mourners attending Joey’s funeral were Bill and Gloria Gaither along with representatives from their label. Fast forward to present day, Walker is signed with the Gaither Music Group and has released his album titled Call Me Old-Fashioned with Rory acting as the producer. He has also filmed a television special in Joey and Rory’s concert hall.

Bradley recently agreed to a Question & Answer session with Country Fancast. Enjoy his insightful responses below!

Country Fancast: “How did you first become acquainted with Joey and Rory Feek?”

Bradley Walker: “I first ‘met’ Joey and Rory the ‘old-fashioned’ way, through MySpace! They found me online after hearing my first solo release, ‘Highway of Dreams,’ and we quickly became very close friends. I drove to Marcy Jo’s to hear them perform at a songwriters night, and we immediately felt like we’d known each other forever.”

CF: “What ran through your head when Rory asked you to sing “Leave It There” at Joey’s graveside service?”

BW: “Rory called on the night of Joey’s passing, and we hadn’t had very many opportunities to talk, with all they’d been going through. We all stayed in touch through text but had only talked on the phone a time or two. When he called so quickly after the news, I was very emotional…, but then when he asked if I would sing, several emotions hit me at the same time. Sadness, of course, but I was (and still am) so honored that Joey would want me, of all people, to sing for her one last time. Joey was a dear, dear friend, but she was also someone I admired as a singer, so to be asked to sing for her, Rory and their family at that time–that was an incredible honor for me. Very tough to get through, but such an honor.”

CF: “When Bill and Gloria Gaither approached you after Joey’s service, what did they say and how did you react?”

BW: “Honestly, I didn’t have a chance to meet Bill at the service. Joey’s mom, June, introduced me to Gloria briefly before the service began. I wanted to meet Bill that day, but we just never were in the same spot at the same time. I’ve since been able to spend time with both of them, and they are two of the kindest people I’ve ever met. They, like Joey and Rory, are so real, and they love what they do. To have their support and belief in me is one of the greatest blessings of my life.”

CF: “What was it like recording your album Call Me Old-Fashioned and its companion concert DVD with Rory Feek acting as a producer?”

BW: “The whole process has been a very fun experience. Rory and I spent lots of time choosing the songs for this project, and to see it all come together in such a relatively short period of time has been amazing. I can’t say enough about Rory–his willingness to do this for me… with me…his incredible support, and the fact that he’s done things simply for me that I know have been tough. He introduced me on the stage of the Grand Ole Opry. To have this experience with him is something I will always cherish.”

CF: “Out of all the tracks on Call Me Old-Fashioned, which holds the most meaning for you personally?”

BW: “It’s hard to only pick one song. So many of the songs have a special, personal meaning to me–from songs I’ve sang all my life like ‘Why Me’ and ‘Sweet Beulah Land’ to a song written for a dear friend in ‘Sing Me to Heaven.’ I’d have to say, though, that “In the Time That You Gave Me”–having that duet with Joey is a very, very special thing to me. She and I always loved singing together, and I feel like she’d be proud of that song, the way it turned out…I know I am!”

CF: “Can you tell us about the inspiration behind “I Feel Sorry for Them,” the original song you wrote with Rory and Tim Johnson?”

BW: “I got together one day at Joey and Rory’s farm to write with Rory and Tim, and Tim had the idea to write a song from the perspective of someone who’d had a life-changing experience…someone who’d maybe had a car accident and could no longer walk…and to tell the story of how people might feel sorry for that person and their life situation. They both said (Rory and Tim), “Why don’t we write this from your perspective?’ At first I was a little apprehensive about it because I’ve never wanted to bring lots of extra attention to my personal challenges. But after the song was finished and I played it for a few folks, I realized the impact the song can hopefully have on someone who may be dealing with challenges of their own. We don’t have to be in a wheelchair to have challenges, but we can all point to what’s good in our life and be thankful.”

CF: “How would you describe Call Me Old-Fashioned to avid country music fans?”

BW: “To me, it’s an album packed full of great story songs about real life–songs that are inspirational but that relate to real-life situations that everybody goes through.”

CF: “Outside of music, what other passions do you turn to in order to rejuvenate your creativity?”

BW: “Music is my passion! Music has always been my first love, so there’s not much in my life that doesn’t revolve around it, either singing myself or going to enjoy the music that I love at a live concert, etc…. Time with my family is always the most precious to me. The ‘simple pleasures of life’ are what bring me the most enjoyment and make me realize how blessed I am to be able to pursue my passion.”

CF: “Since Call Me Old-Fashioned was released in September, do you currently have any other projects in mind?”

BW: “I’m honored to have been able to be a part of a new Gaither Homecoming series that’ll be coming out in February. We got together with all of the Homecoming friends in Indiana in early September, and to be a small part of something so legendary that has meant so much to so many people for so many years–I’m extremely honored and excited to be a part of that. Otherwise, we haven’t talked about anything new just yet. I’d love an opportunity to record a ‘tribute’ record to all of my country music heroes someday…to showcase some of the songs I grew up on. Maybe I can do that at some point soon.”

CF: “What personal and professional goals do you hope to accomplish within the next five years?”

BW: “Wow…that’s a good question! My biggest goal has always been to have music as my full-time profession. I don’t know when or if that can happen, but I know that I’ll just leave it all in the hands of the Good Lord. If you had told me a year ago that I’d have my own CD/DVD project as a part of the Gaither music family, that would’ve seemed like a dream. But I’m living proof that dreams can and do come true, so I’m gonna keep on dreaming!”

We’re certainly rooting for Bradley Walker on his journey to becoming a household name. Be sure to keep up with Bradley via his website and Facebook Page.

On Thursday, December 15th, he will be singing at a benefit show for High Hopes Development Center, Indy Feek‘s school. For more information on the event, visit here.

Share this piece with other fans of the inspirational Feek family!