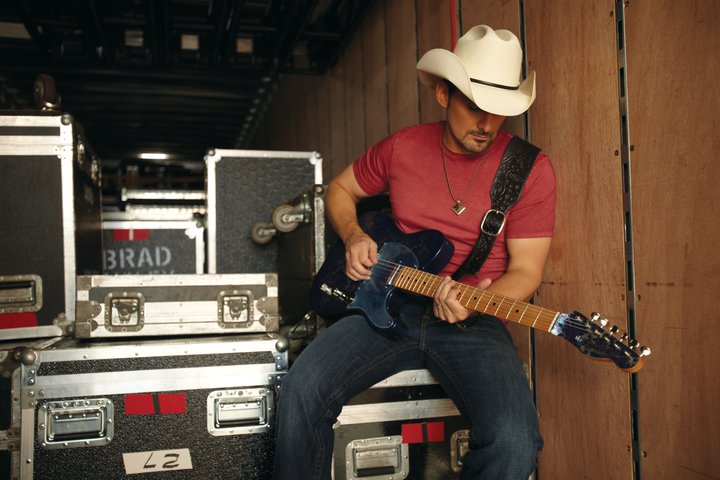 Brad Paisley kicked off his Crushin’ It World Tour May 15th, playing to more than 50,000 fans the first weekend, including sold out shows in Philadelphia and Raleigh and he had a pretty awesome set up on stage.

Paisley has included a full bar on stage along with video games guests can play.

“It has a countertop and taps at the end of it,” Paisley says of the tour bar.

“Bar patrons” include contest winners from radio stations, friends and other special visitors. Paisley performs four songs while the guests are imbibing, with their silhouettes projected on a big video screen behind them. As the bar guests leave the stage, they become part a scripted segue between two tunes.

“At the end of ‘Beat This Summer,’ you’re looking at a beach scene [on the video screen], and it went from a nightclub to a tiki bar,” Paisley explains.

“All of a sudden, you see the clouds go rolling in and hear the thunder. The sea starts to churn and they run from the bar like it’s going to get blown away. And then we start ‘Perfect Storm.'”

He also incorporates the Nintendo he has on stage with the show, although he is still working out the kinks with that.

“We ended [‘Whiskey Lullaby’] singing, ‘La la la la la la la,’ and then Mario Cart music starts. It’s that awful game show music playing as Mickey Guyton (on tour with Paisley) leaves the stage. It was something out of Ricky Gervais — like The Office or Veep — the awkward moment. We’ll never make that mistake again. That doesn’t follow ‘Whiskey Lullaby.'”

Mario Cart is still very much a part of the show – just in a different spot. In fact, Paisley hints that Jeff Gordon may show up on stage at a show or two for “Time Warp” and give some lucky young fan the thrill of his life when he gets to play a video game with a Nascar legend.

“Playing with them is going to be mind blowing in every way,” he says, “but it’s also a matter of thinking about, ‘OK, what do I do in my set and how do I win over the hipsters from East Nashville before it’s over?’ The ones that are throwing a fit [saying], ‘What? We gotta sit through that hick?'”