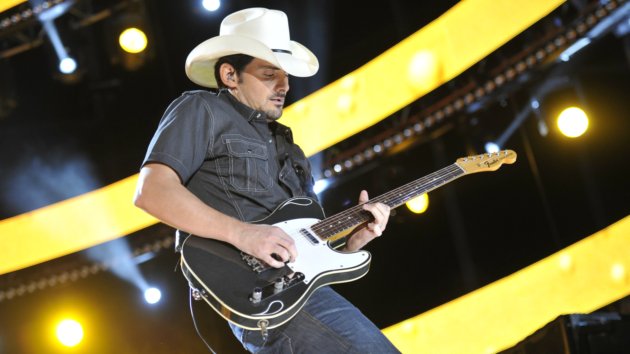 Brad Paisley has just been announced as one of 50 artists to win a 2015 YouTube Music Award, thanks to fans watching his clips and videos online!

Brad Paisley‘s decision to leak his Moonshine in the Trunk album online has really paid off.

While the album was officially released on Aug. 26, he began not-so-secretly leaking the album online almost a full week before.

“It really came down to me wanting to present these songs to the world in the best way possible,” says Paisley of his decision to leak the album.

“In a way that made it fun to hear them for the first time. In a way that sort of encompassed everything they’re about.”

Because of all the buzz Moonshine in the Trunk created, he was chosen as one of the winners of a YouTube award. The winners were chosen based on the biggest growth in views, subscribers and engagement over the last six months. Together, these artists were watched over 47 billion times.

In honor of the artists who proved their YouTube worth, the video-sharing website will be doing something it’s never done before. A collection of exclusive new music videos from 15 of the winning artists will be released on The YouTube Music Awards channel March 23. The videos will debut simultaneously at 10 a.m. PT.

You’ll also have the chance to get in on the action: artists will take some lucky fans behind the scenes and invite others to be a part of the videos.

“Crushin’ It” is Paisley’s current single from his chart topping 2014 album Moonshine in the Trunk.