Brad Paisley Teams Up with Fender For New Guitar 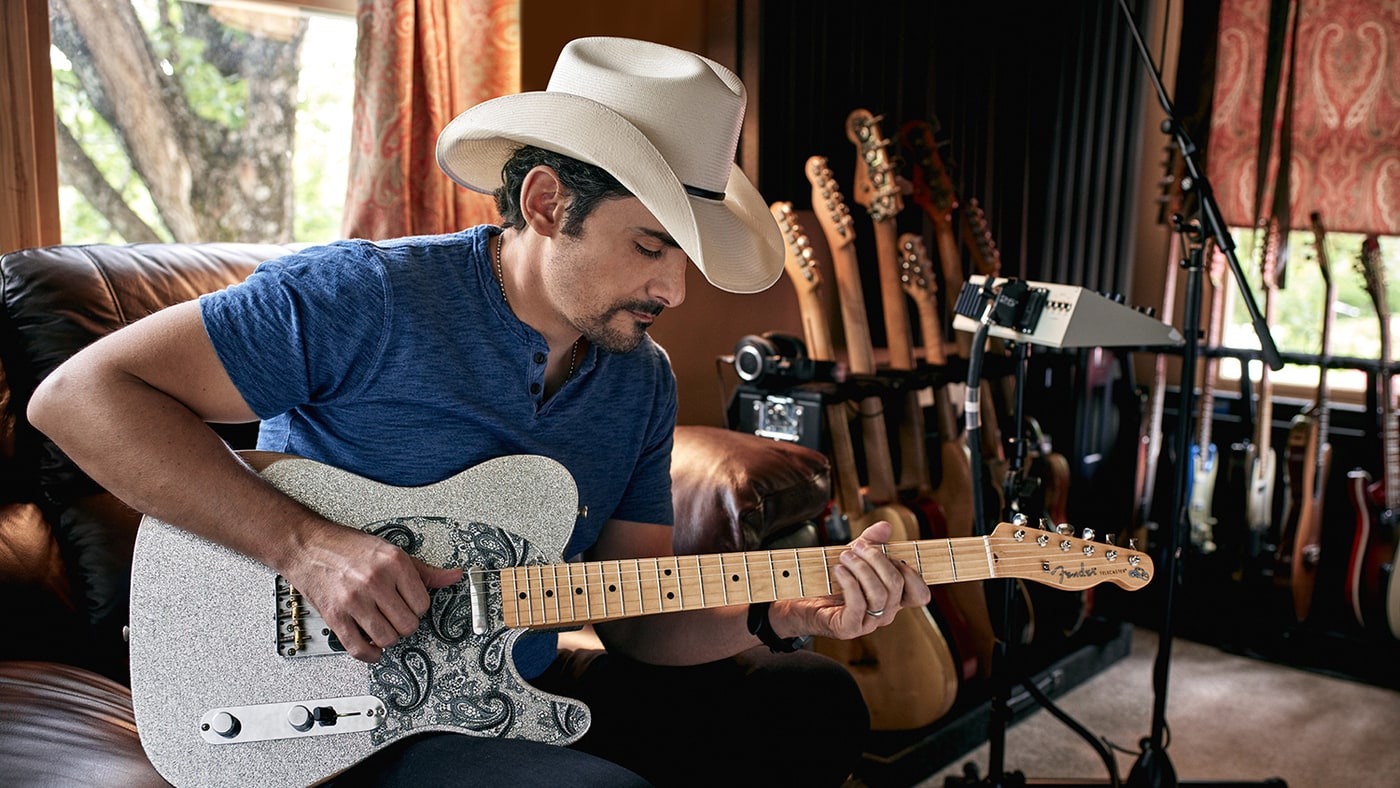 Brad Paisley is teaming up with Fender guitars to release a signature Telecaster. Check out the new guitar and how Paisley added his own touch here.

Fender Musical Instruments Corporation (FMIC) has announced its collaboration with three-time Grammy Award-winning superstar and celebrated country guitarist Brad Paisley. Together, they created a signature guitar called the “Brad Paisley Road Worn Telecaster” which will retail for $1,199.99. This classic and timeless guitar resembles one of his most prized guitars in his collection: his silver sparkle Telecaster. He will officially reveal the new model at Summer NAMM 2017 in Nashville, Tennessee, but catch a sneak peek of the design here!

His Telecaster can be heard on his debut record, Who Needs Pictures. It created a weathered and warm sound throughout his music, which set the tone for his career. He’s known for his songwriting and incredible instrumentals. Notably, that guitar is decorated with a rose-colored paisley pattern on the lower half.

When Fender and Paisley worked together on his new signature guitar, they were inspired by the paisley design, as it pairs perfectly with the singer’s last name. Check out the design on the new Brad Paisley Road Worn Telecaster guitar above.

“The best thing about having a Fender Signature Telecaster is the unwavering quality associated with the brand’s legacy and confidence that I’m introducing a great guitar at an incredible price point,” Paisley said. “I set out to create a guitar that was accessible for the vast majority of young people out there, who I hope to inspire to change the world with musical dreams.”

The instrument reflects Paisley’s dynamic personality, and it supports his shared mission with Fender: to inspire the next generation of guitar players. It’s body is custom-made with a lightweight core and a spruce top and back. Paisley also chose an enhanced “V” neck shape, which creates a comfortable grip. The silver sparkle finish and paisley-designed pickguard make this guitar legendary.

Take a look at this video, and learn about the important mission that Paisley and Fender want to share.

Paisley scored many awards with his knack for playing guitar and creating country hits. His music and performances yielded three Grammy Awards, two American Music Awards, 14 ACM Awards, 14 CMA Awards (including Entertainer of the Year) and 24 No. 1 hits. Paisley’s latest project, LOVE AND WAR, debuted at No. 1 on Billboard’s Top Country Albums chart, marking his ninth consecutive studio album to enter at the chart’s top spot.

“Brad’s influence has reached every corner of modern guitar playing realm and music at large across all genres, not just country,” said Justin Norvell, Senior Vice President of Fender Products. “Not only is it a beautiful guitar, but it has some amazing, unique features that we developed directly with him, namely the lightweight body and hot pickups.” Together, they combined features from some of his favorite guitars. Norvell said the result is “a truly compelling instrument we hope will empower players everywhere.”

Paisley credits Ricky Skaggs, Vince Gill, and Albert Lee with introducing him to the Telecaster brand. He has played them throughout his whole career, and now his own signature version is on the market. More info on the guitar can be found here.