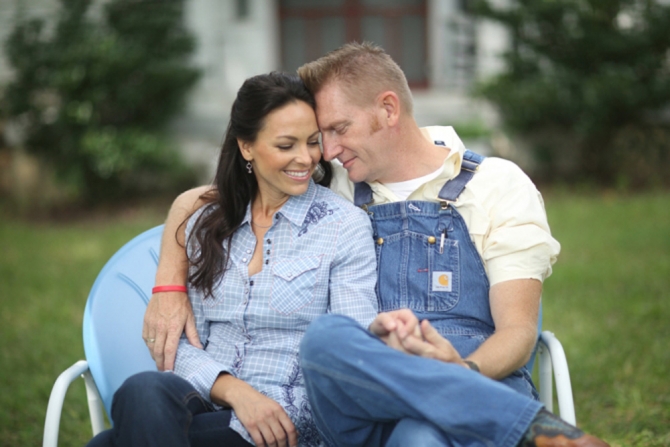 Watch the making of the music video for Joey and Rory Feek's emotional song "When I'm Gone".

When I’m Gone Behind the Scenes Video

When Joey and Rory Feek recorded “When I’m Gone” for their 2012 album His & Hers they had no idea that the song would later become so relevant to their life together. When you watch the video for the song you see Joey Feek telling her husband Rory Feek to be happy after she has passed away. The emotion in the video is so real and watching it so close after Joey’s death is heartbreaking and a little eerie.

During the filming of the music video, some four years before Joey would be diagnosed and pass away from cervical cancer, the couple try to portray the emotional message of the song authentically. They chose to film it at their farm in Tennessee and Rory’s tears in the footage are real.

“From right here I get to see my bride’s garden…and our back field and the cemetery where the people who built our farmhouse are buried, and where we’ll be buried some day.”  Rory Feek says in the video below.

“That view through the screen door, there’s no acting going on. That stuff is real, even the emotion that I felt the second I starting thinking about what my life might be like and it just overtook me and I couldn’t stop myself.” he continued.   Watch the official music video, read the story behind the song and check out the lyrics below:

Behind the Scenes of “When I’m Gone”

The moving 2012 tune “When I’m Gone” was written by Joey Feek‘s friend Sandy Lawrence as she was losing her own mother. The lyrics echo the words she wanted so desperately to hear from her mother before she died. Unfortunately, the song also eventually described Joey Feek’s courageous battle with terminal cancer.

Rory Feek stated, “The day we made the video, our plans were to just have Joey and I sing the song in front of the cameras and Sandy play piano in the background.  We lit candles and transformed our barn into a beautiful studio set.  But an hour or two before shooting started, Gabe and Aaron and BA came to me and said we have an idea… they said, “what if you’re the one who has lost someone and Joey’s singing to you”?  “I didn’t like it.  I told them so.  It hit too close to home.  But as they continued to talk and I listened… I realized that “yes, of course.  We have to make it that way.  It’s the story in the song”.  “It wasn’t what I wanted… but it’s what the song wanted.   And though it scared me for us to be that vulnerable, it was also what our whole lives and music career was about – being real… being honest.  And so the cameras rolled and both Joey and I let us ourselves imagine what it would be like if she had to leave this world and I was left behind without her…”

And somehow, the decisions made in filming the  “When I’m Gone” music video became an eery prophesy of what came to be.

For a period of time, there was a “Behind the Scenes” video about “When I’m Gone” that was removed for copyright issues.   So, we provided the story behind the song from Rory Feek.

A bright sunrise will contradict the heavy fault that weighs you down
In spite of all the funeral songs
The birds will make their joyful sounds
You wonder why the earth still moves
You wonder how youll carry on
But you’ll be okay on that first day when I’m gone
Dusk will come with fireflies and whippoorwill and crickets call
And every star will take its place
And silvery gown and purple shawl
You’ll lie down in our big bed
Dread the dark and dread the dawn
But you’ll be alright on that first night when I’m gone
You will reach for me in vain.
You’ll be whispering my name
As if sorrow were your friend
And this world so in the end
But life will call with daffodil
And morning glorious blue skies
You’ll think of me some memory
And softly smile to your surprise
And even though you love me still
You will know where you belong
Just give it time we’ll both be fine
When I’m gone.

Remember to “share” this with other Country Music fans and loved ones.