A Tribute: Glenn Frey, Co-Founder of the Eagles, Dies 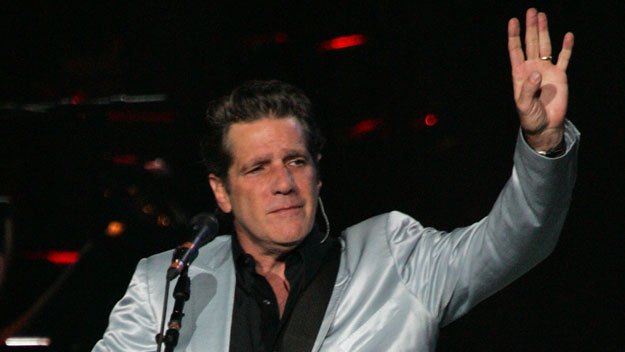 Glenn Frey, founding member and guitarist for the Eagles, has passed away.

The Eagles and Glenn Frey‘s family shared the message below after news broke:

“Words can neither describe our sorrow, nor our love and respect for all that he has given to us, his family, the music community and millions of fans worldwide.”

In memory of Glenn Fry, we’ve included a list of some of his top hits from the Eagles and his solo career.

Eagles: Glenn Frey and Jack Tempchin
The lyrics to “It’s Your World Now” were included in the announcement of Glenn Frey’s death by the Eagles on their Facebook page and website.  The chorus of this beautiful song says it all.

Chorus of “It’s Your World Now”

The Heat Is On

Glenn Frey
“The Heat Is On” is considered Glenn Frey’s biggest hit from his solo career. It was included in the Beverly Hill Cop soundtrack.
3

The Eagles
Released in 1977 “Hotel California” become one of The Eagles most well known songs. The credits for this song are shared by Don Felder (music), Don Henley, and Glenn Frey (lyrics)
4

You Belong To The City

Glenn Frey
Released in 1984, “You Belong To The City” become another well-known hit from Glenn Frey solo career.
5

The Eagles
Written by Jackson Browne and Glenn Frey, “Taking It Easy”, was The Eagles first release in May 1st, 1972. It peaked at #12 on the Billboard Top 100 list and became one of the bands signature songs.

The contributions of Glenn Fry to country music, and the music industry as a whole, are too long to list. He will be missed.

David Thanks for showing us all how to do it. Rest in peace.