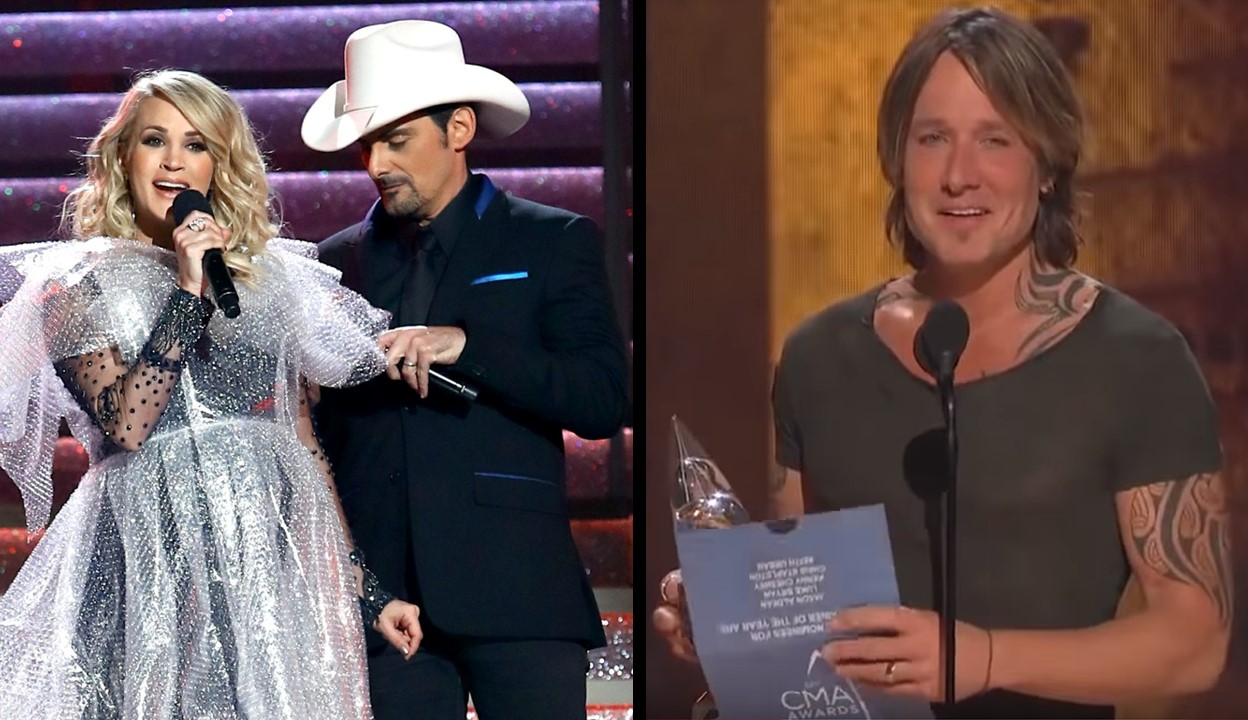 Country icon Garth Brooks began the night with a touching tribute to those affected by the Thousand Oaks tragedy, saying “Tonight’s show is lovingly dedicated to the 12 individuals whom we lost far too soon just a week ago tonight at the Borderline [Bar & Grill] in Thousand Oaks, CA. Tonight let’s celebrate their lives, let the music unite us with love in their enduring memory, so please, join me now in a moment of silence.”

Luke Bryan then performed “What Makes You Country,” and welcomed rising country stars Luke Combs, Lindsay Ell, Chris Janson, Ashley McBryde, Jon Pardi, and Cole Swindell. Ell shredded during her guitar solo, Janson rocked on the harmonica, and Combs, McBryde, Pardi and Swindell joined in on vocals before all seven artists united center stage to close out the first performance of the night.

Stapleton and Mike Henderson accepted the Song of the Year award for “Broken Halos” saying, “I didn’t expect this one…I wrote this one with one of my dear friends and heroes.” He then thanked his wife, family, and lucky stars that he gets to live in Nashville where “all this cool stuff happens.”

Jason Aldean and Miranda Lambert took the stage for a heartfelt performance of “Drowns The Whiskey.”

A shocked and emotional Combs accepted the New Artist of the Year award, thanking his mom, dad, girlfriend, and road family, ending with, “God, I love Country Music, man.”

Thomas Rhett took viewers through “Life Changes” as he moved from the stage to the audience before the entire Ravenwood High School Marching Band from Williamson County, TN made their way to the stage. They were then joined by Thomas Rhett for the grand finale as he jammed on one of the student’s drums while sparks showered the stage.

That was definitely a life-changing performance by @ThomasRhettAkins and the Ravenwood High School marching band from Brentwood, TN. #CMAawards 🎺🎷🥁

Dan + Shay took us on a journey of love, heartbreak and second chances during their performance. They had everyone raising a glass of “Tequila” as snow fell to the stage before the piano lit up for the final verse.

WEST COAST! How are you feeling about the show so far?! #CMAawards

Stapleton took the stage again to accept his second win of the night for Single of the Year with producers Dave Cobb and mix engineer Vance Powell, for “Broken Halos” and said, “We wrote this song about people that have gone on long before their time…and I want to be thinking about the people out in California right now as we are accepting this award and want to dedicate this to them.”

Lauren Alaina gave us “A Lesson in Leavin’” as she acknowledged Country Music legend Dottie West from the middle of the audience, recognizing West’s recent induction into The Country Music Hall of Fame.

Kelsea Ballerini convinced everyone to forget about the ex they “thought they’d miss” during her edgy performance of “Miss Me More.”

Old Dominion brought the motel vibes, glowing neon signs and all, to the CMA Awards with their summer smash “Hotel Key.”

Vocal Group of the Year winners @OldDominionMusic left their heart on their sleeves and everything they have on the #CMAawards stage. Check out their performance of “Hotel Key”.

Underwood reminded us that “Love Wins” during her powerful, color-filled anthem. The Portara Ensemble from Middle Tennessee then made a surprise appearance during the performance, joining Underwood on stage for a commanding finale.

The shock on Old Dominion’s faces said it all as they made their way to the stage after winning Vocal Group of the Year for the first time, making sure to thank their fans, the songwriters, and all those who believe in what they’re doing.

Brett Young had us begging for “Mercy” during his raw, emotion-filled performance. Casually sitting solo on a stool in the middle of the audience, Young thanked fans for making this his fourth No. 1 song before recognizing the CMA Broadcast Awards Radio Station of the Year winners.

Country Music Hall of Fame inductee Ricky Skaggs and his band Kentucky Thunder took viewers on a journey from one classic song to another, starting with “Black Eyed Suzie” before Urban and John Osborne made a surprise appearance for “Highway 40 Blues.” Skaggs and band were then joined by young instrumentalists Sierra Hull on mandolin and Carson Peters on fiddle. Paisley joined on guitar, Marty Stuart on mandolin for “Country Boy.”

We are LIVING for this iconic performance by 2018 Country Music Hall of Fame inductee @RickySkaggs and some of his Country Music friends! #CMAawards

Midland made their CMA Awards debut, honoring songwriter Jerry Reed and Hollywood legend Burt Reynolds with a performance of “East Bound and Down,” bringing their traditional Country vibes, dance moves and personalities to the stage.

Kacey Musgraves was in awe as her latest release Golden Hour was recognized as Album of the Year with producers Ian Kitchuck and Daniel Tashian. She thanked her producers, management, fans, and her family.

Underwood congratulated Mac McAnally, the Musician of the Year winner, which was announced at the pre-telecast reception.

New Artist of the Year winner Combs shared a story about heartbreak during his performance of “She Got The Best of Me.”

That @LukeCombs performance during the #CMAawards got us like 😍

Urban delivered an electric performance of “Never Comin Down” 10 feet high above the stage with a silhouette of his band and a rock guitar finale.

Brooks made the worldwide debut of his new song “Stronger Than Me,” written about his wife Trisha Yearwood, giving us a glimpse into their almost 14-year marriage. As Brooks sang, the spotlight shone on Yearwood, and he performed directly to her, a personal moment that fans experienced alongside the couple.

Brothers Osborne graciously accepted the award for Vocal Duo of the Year joking, “We don’t know why we keep winning this…we thought this was going to Dan + Shay. And if we were in Florida, there’d be a recount.”

Pistol Annies took back their independence during their rousing girl power anthem “Got My Name Changed Back” as Lambert played an “authentic washboard.”

So happy to have @PistolAnnies on the #CMAawards stage! #PistolAnniesAreBack

Dierks Bentley and Brothers Osborne commanded the stage with a powerful duet of “Burning Man.”

Stapleton, alongside Maren Morris, Mavis Staples and Stuart, brought pure soul to the stage during their medley of Pops Staples’ “Friendship” and The Staple Singers’ “I’ll Take You There.”

Did you miss the #CMAawards last night? Watch it On Demand with the @ABCNetwork app and on @Hulu!

Co-host Paisley’s television debut of his new song “Bucked Off” was filled with rodeo cowboys, a fiddle solo, the always epic Paisley shredding on the guitar, and a nod to hero George Strait.

Stapleton accepted the award for Male Vocalist of the Year saying, “I’m really proud of this award, and I’ve tried really hard to be a good singer” before thanking his kids who “put up with him being gone quite a bit and not getting to be as good a dad as I would always like to be” before telling them he loves them and thanking them for “sharing him with all these people.”

What a MAGICAL performance from the incredibly talented @SpaceyKacey! ✨ #CMAawards

Eric Church closed out the CMA Awards with a high-energy, showstopping performance of his hit single “Desperate Man.”

An emotional Underwood took the stage to accept the Female Vocalist of the Year award, thanking her family, her Country Music family and continuing, “Thank you God, I have been so blessed in my life.”

Urban, in complete shock of winning Entertainer of the Year, thanked his wife Nicole Kidman and barely held back tears as he acknowledged everyone on his team. Watch his emotional acceptance speech below!

Share these 2018 CMA Awards highlights with other country music fans!