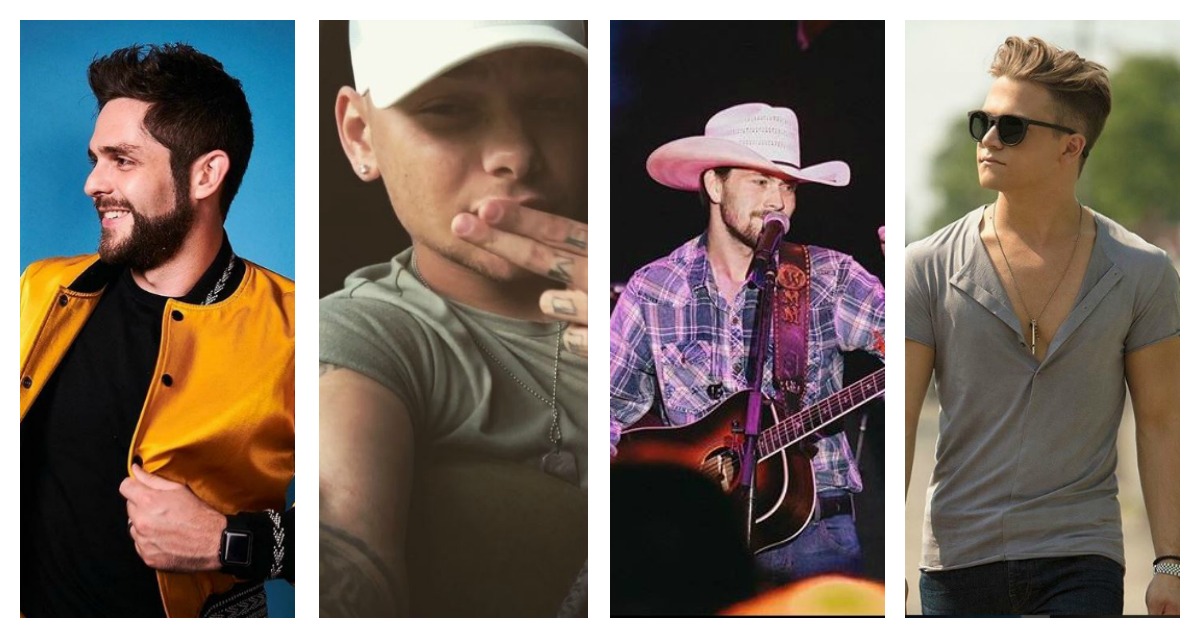 Country music has no shortage of good-looking guys and we have put together this smokin’ hot list of country music's singer/songwriters who are under 30 -years-old.

They say that things get better with age and in the case of these 10 country music singers we can only wonder at where they will be when they enter their third decade of life. For now, we can appreciate them as they navigate being in the spotlight before their 30th birthdays and contend with the older guys for their place on the stage.

New demo called work….. pumped for this album and also the new single releasing this week 🔥 tag a friend

Kane Brown gained attention by posting homemade videos of himself covering his favorite country songs. It was his cover of “Check Yes or No” by George Strait that went viral and caught the attention of record executives. He released his first EP in 2015 titled Closer.

Been cooking up some good stuff. Can’t wait for y’all to hear all these new songs 🙌🏼

Michael “MT” Tyler was only 13-years-old when he made his first connection in the Nashville music scene and just a few years later he would earn several notches on his songwriter belt, including Jason Aldean’s “Laid Back” and Dierks Bentley’s Platinum-selling, chart-busting smash, “Somewhere On A Beach.”

Country fans got their introduction to Morgan with “I Met a Girl,” his sweetly romantic debut single. Old and new, fast and slow, steel and piano, the song will give fans exact GPS coordinates of where Morgan is coming from.

“I like to sing about love. I’m a lover, not a fighter,” Morgan says with a Mississippi lilt in his voice. “I like to write about having a good time. I’m a typical 22 year old.”

McCreery won the tenth season of American Idol on May 25, 2011 and quickly vaulted himself into the country music spotlight. The talented McCreery had his ups and downs with the music industry but after parting ways with his label Mercury Records he released his song “Five More Minutes” and had the honor of having the first single to ever chart on the Country Aircheck/Mediabase Top 50 without a record label.

Being the son of a famous country music star can be a tough act to follow, but Thomas Rhett seems to be doing just fine and his dad Rhett Akins couldn’t be more proud. These days, Rhett is playing the role of family man and we get to see his beautiful family all over his socials and in the music video below.

Born in Victoria Texas, but raised just outside of town in the rural community of Inez, Mason Lively grew up in a country music atmosphere. His appreciation for the genre can be traced back to his childhood. He would listen to artists like Willie Nelson, Merle Haggard, Ray Price, and Ernest Tubb to name a few. Eventually studying artists in the Texas scene like Robert Earl Keen, Pat Green and many more, Mason started playing guitar at age 14 by learning basic chords, but claims that song-writing “sort of snuck up on him”.

Hey Houston! See you at the @samsungmobileusa Galaxy Studio at @thewoodlandsmall this Saturday. Come on by!

Hayes came on the scene with his debut single “Storm Warning”, released to radio on May 16, 2011 when we was only 20 years old. His self-titled major-label debut album was later released and where he famously co-wrote every song, played every instrument, and along with Dann Huff, produced the album.

Mountain Jam was incredible. So happy to be apart of it.

Miranda Lambert’s former beau Anderson East is actually 5-years his senior. East is mostly known in the Americana world, but his high-profile relationship with Lambert catapulted him into the country music world. Last year, East appeared on the Fifty Shades Darker Soundtrack, performing the track “What Would It Take”.

The @tasteofcountry takeover has begun! Follow along and I will see y’all at the @Opry TONIGHT!!

Levi Hummon made his imprint on the Nashville community before he realized the extent of his craft. Born and raised in Music City, Levi was surrounded by music greats. Even though he studied painting in college, he was being drawn back to his dormant musical talents – singing and songwriting. At the close of a significant relationship, Levi began to explore songwriting as a way to navigate his life and relationships.

I used to kinda be embarrassed about being from the country. Like being from here meant I wasn’t good enough for the “cool kids”. Then I got some perspective and realized that being from here is dope af. I was born here, gonna raise my family here one day and unless Jesus comes back early I’m gonna be buried here.

Jackie Lee is an exceptional human and that’s not just because of his musical talent. The singer/songwriter has already had to fight THREE battles with cancer all before his 30th birthday. In June of 2016 his mother, LaDonna Glee Midkiff, lost her battle with cancer. Then approximately three months later, doctors diagnosed Lee with testicular cancer. Lee says he was on the road writing songs in Cleveland, Ohio with Florida Georgia Line when he first started noticing symptoms of his disease.

Lee is now back playing shows, he had his first one in May of this year, and is excited about what is ahead for him.