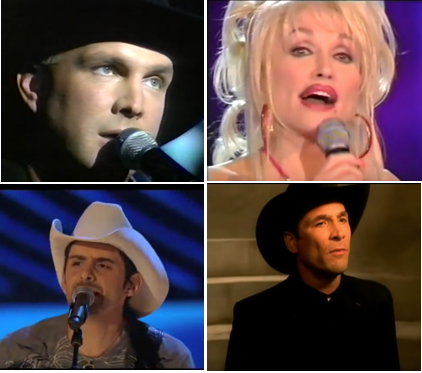 Here we go. Country Fancast counts down the top 10 country love songs of all time starting with number 10.

You're Still The One

Shania Twain
Released in 1998 by Canadian singer Shania Twain, “You’re Still The One”,  peaked at the number two spot on the Billboard Hot 100 and became her most successful crossover single.  The song was also nominated for four Grammy awards and won two of them in 1999.
9

Kenny Rogers
This timeless classic song shares the feelings of a man looking back on a relationship, mentioning the good times and the bad times.  Kenny Rogers keeps coming back with the same declaration: I’m so glad I stayed right here with you / Through the years.
8

When I Say I Do

Faith Hill
“Breathe” was the number one single of 2000 on Billboard‘s year-end countdown. Faith Hill exposed the more sultry side of herself in what became one of her more controversial videos.
6

When You Say Nothing At All

Alison Krauss
Alison Krauss’s version of the Paul Overstreet and Don Schlitz song, “When You Say Nothing At All” become a surprise hit in 1995.  Originally recorded as a tribute song to Keith Whitley, the song leaked out to receive unsolicited airplay on the radio.  The song began to chart, becoming Alison Krauss’s first song to ever reach the Billboard charts.  That same year in 1995, the recording won the CMA award for “Single of the Year.”
4

How Do I Live Without You

To Make You Feel My Love

Garth Brooks
This Bob Dylan song has been done by various artists, such as Billy Joel, Adele,  Bryan Ferry, Kelly Clarkson but the Garth Brooks‘ version is what makes the song qualify for our country love song top 10 list.  Garth Brooks covered the song in 1998 for the film Hope Floats along with Trisha Yearwood.  The song was also nominated for the 41st Grammy Award for the Best Male Country Vocal Performance.
2

Brad Paisley
In 2009, Brad Paisley wanted to make a change by including a love ballad in his upcoming album American Saturday Night  — and boy, did he make a good one. Brad Paisley and fellow song writers Chris DuBois and Ashley Gorley spent a long time working on the song.  The goal was to write something that would touch their wives.  They figured if the song would resonate with their wives then it would also resonate with the country music fans. The writers recall that their wives freaked out the first time they heard it. This song went on to become not only a fan favorite but also one of rural America’s most popular wedding songs.
1

I Will Always Love You

Dolly Parton
Written, composed, and originally recorded by Dolly Parton, “I Will Always Love You” has become one of America’s most popular songs and ranks as our top country love song of all-time.  Originally recorded in 1973 the song has risen to the top spot on the Billboard Hot Country chart two separate times, once in 1974 and another in 1982.  The full story behind this song is truly amazing.

There you have it.  Our top country love songs of all time.  There were a number of runners up to the list. We figured we’d include them as well:

If there are country love songs that we missed or that you feel should have be considered, please let us know in the comment section below.  We will be revisiting the list periodically to keep it up to date.